On the 19th february at 8 am I woke up, had breakfast, showered, picked up my stuff and took the tram to the bus station to take the coach to the Grenoble airport (4 euros single way). Fifty minutes later I was at the airport heading to the only spot I know, which is 30 meters from a taxiway and 120 from the runway. Traffic at the Grenoble airport is “intense” : in two hours I cought one easyjet A319 and one Transavia 737-700.

What is funny about that airport’s security control is that 5 people are handling one X-ray machine, of those 3 are just walking around watching paint dry. My plane was leaving two hours later, which I spent reading and taking a few pictures from the gate. 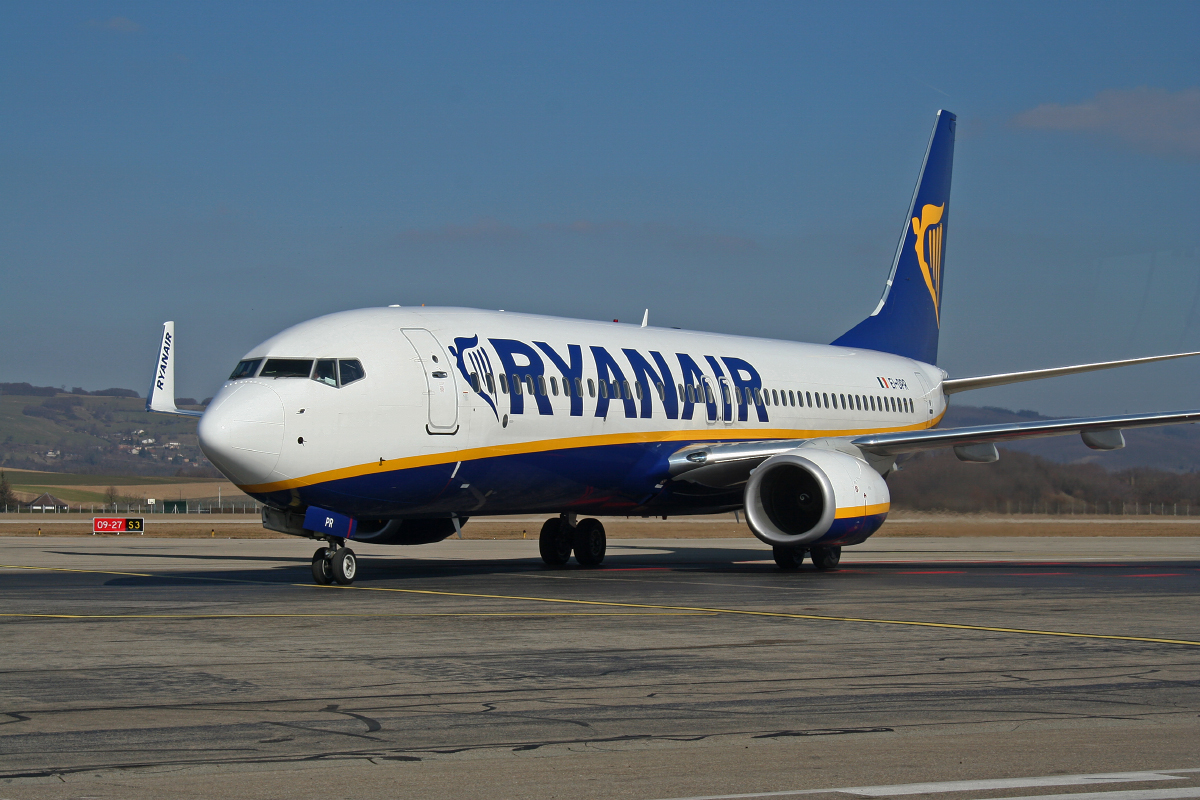 The flight was fully loaded, and before the departure, the flight attendants had to check all web checked-in passengers because of a counting problem. The flight was pleasant as there were nearly no clounds over la Manche and we could see central london easily. 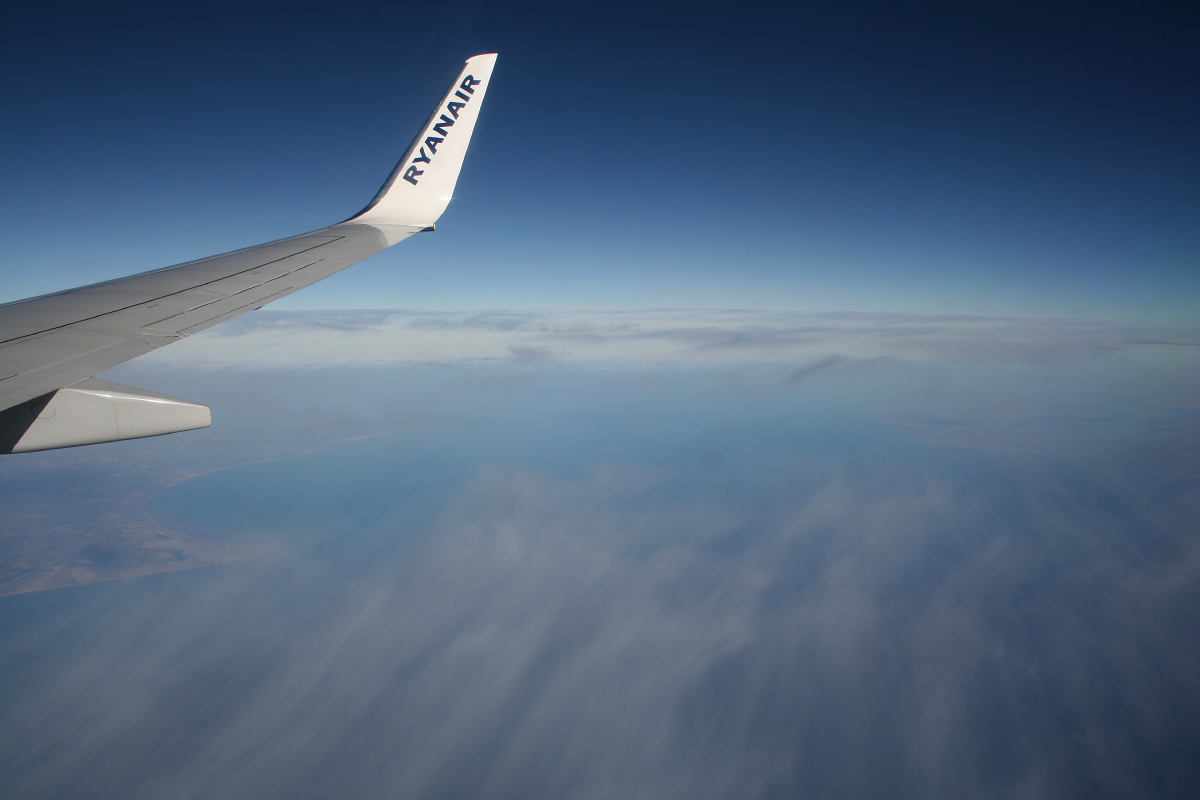 After arrival I took an Easybus to Victoria (for £6), which takes apprx. 1:30h depending on the traffic (the cool thing is that even if you’ve booked for a precise time, if other buses aren’t full, the driver accepts you, so you can buy a chaep schedule ticket and go on an expensive one). From Victoria, it took 50 minutes (district line to South Kensington, then picadilly line) and £4.5 to heathrow. Since I wanted to use the last light raws of the day, I descended at Hatton cross, not knowing that if I pass the ticket machines, I can not continue to heathrow. The worst is that if want to go to Heathrow terminals 1,2,3 it will cost you another three pounds! So after buying a few sandwitches, I walked out of the station and I saw my worst fear: they were using the opposite runways! So I watched a few 747’s roaring above my head and started to seek for anther way to go to the terminals. I was really dissapointed because I was not going to be able to enjoy the famous Myrle ave spot and would only be able to shoot takeoffs.

Since it was getting dark, I found the n. 175 free shuttle bus. There was a few other buses, from which one to Staines (the city of Ali G?). 15 minutes later I came to the main bus station with the ’18th march A380 first flight’ billboards and went first to the gorgeous purple terminal 2. 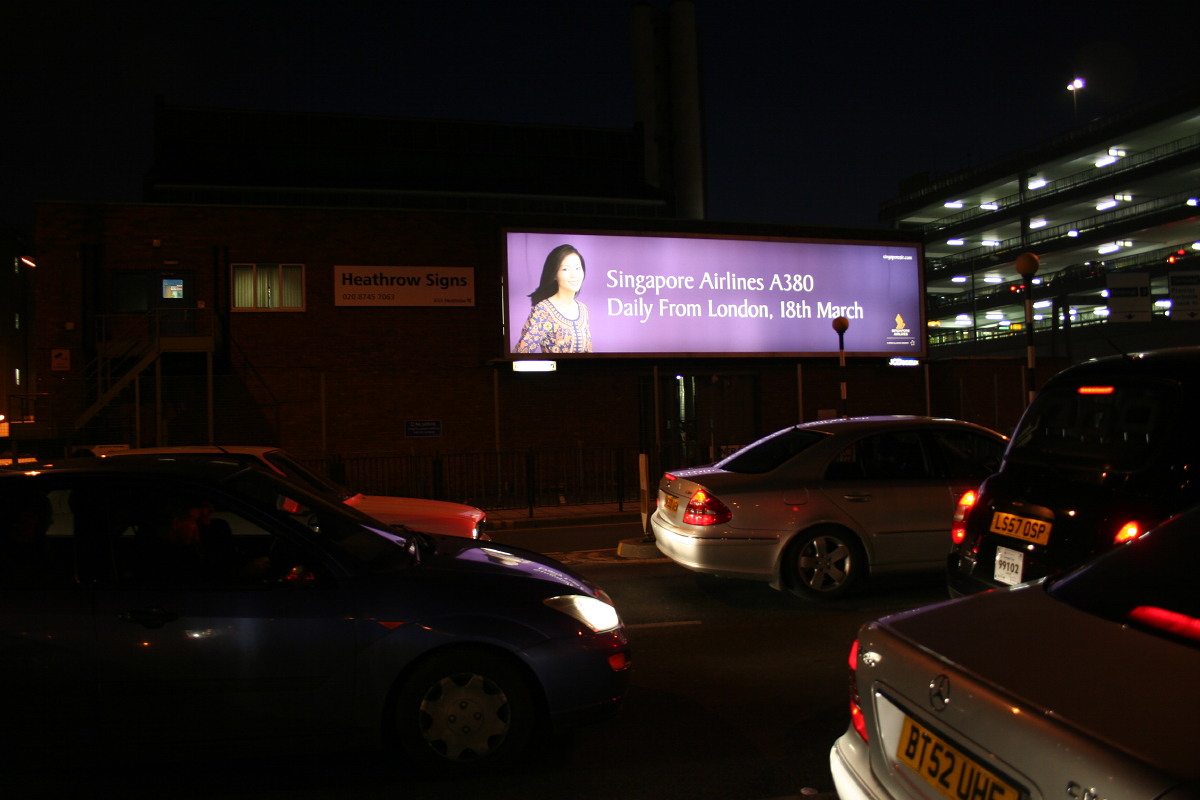 I went on the parking building roof to see some evening takeoffs (Jet Airways 773, some ba 777, 747, virgin 346, which is actually very impressive even from that far with binoculars). So I had some 10 hours to go (sun was setting at 8 something), I went to buy some other sandwitches and found a great place to sleep. It is located on the terminal two, second floor if you go always right. There are not so many people and good places to sleep. Or you can go to the virgin atlantic check-in area, there are good ‘beds’ too.

So I slept, read, ate, got bored and finally stepped into the very fresh foggy humid english air at about 8:30. Since you could only hear the aircraft I was wondering which runways they are using but I was sticking to idea that I was unlucky. So I pressed the button to request the bus driver to stop at the rwy 27R spot to see what was going on. The fog was unbelievable, one couldn’t see a car with its lights on from 70 meters. As I was approaching the centreline and there was still nothing I started to have serious doubts. Maybe 4 or 5 minutes passed. And as I was getting desprate suddenly a British Airways Boeing 747 emmerged from nowhere passing 40 metres over my head! 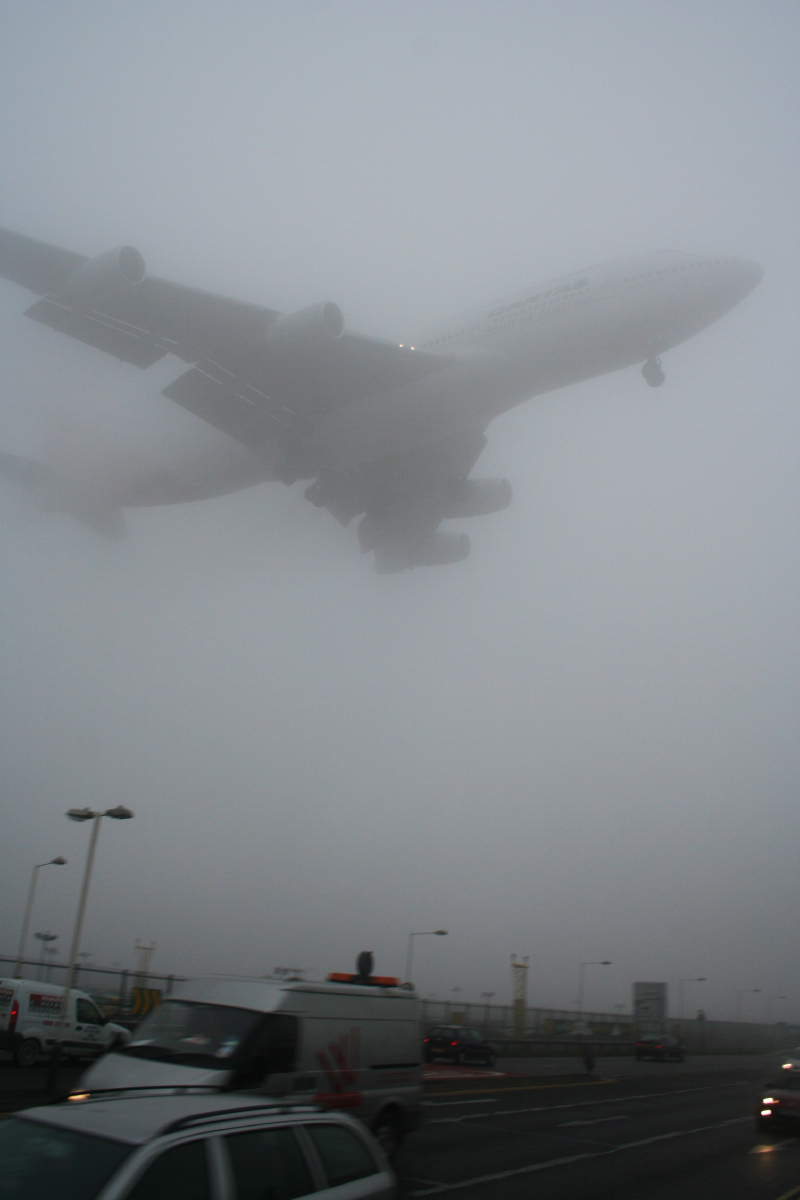 At least I knew I was going to see something interresting that day! Contrails, moisure, all of that good stuff! 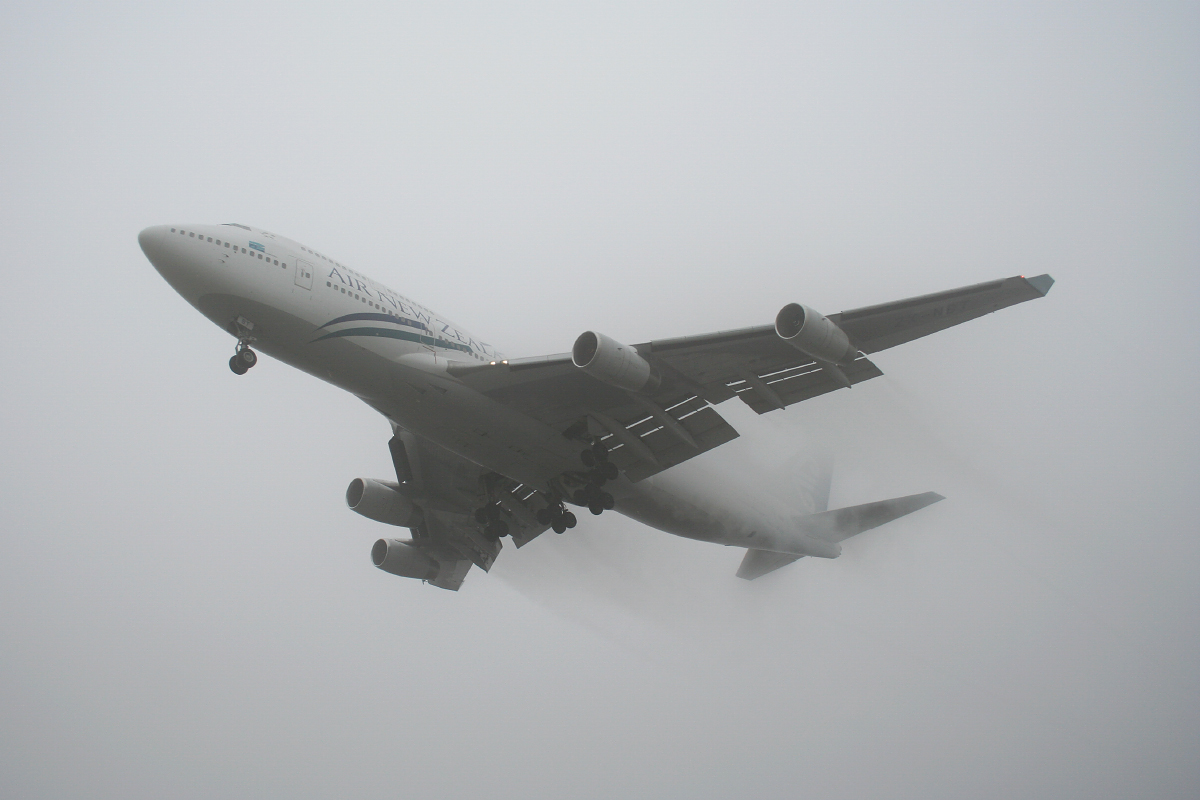 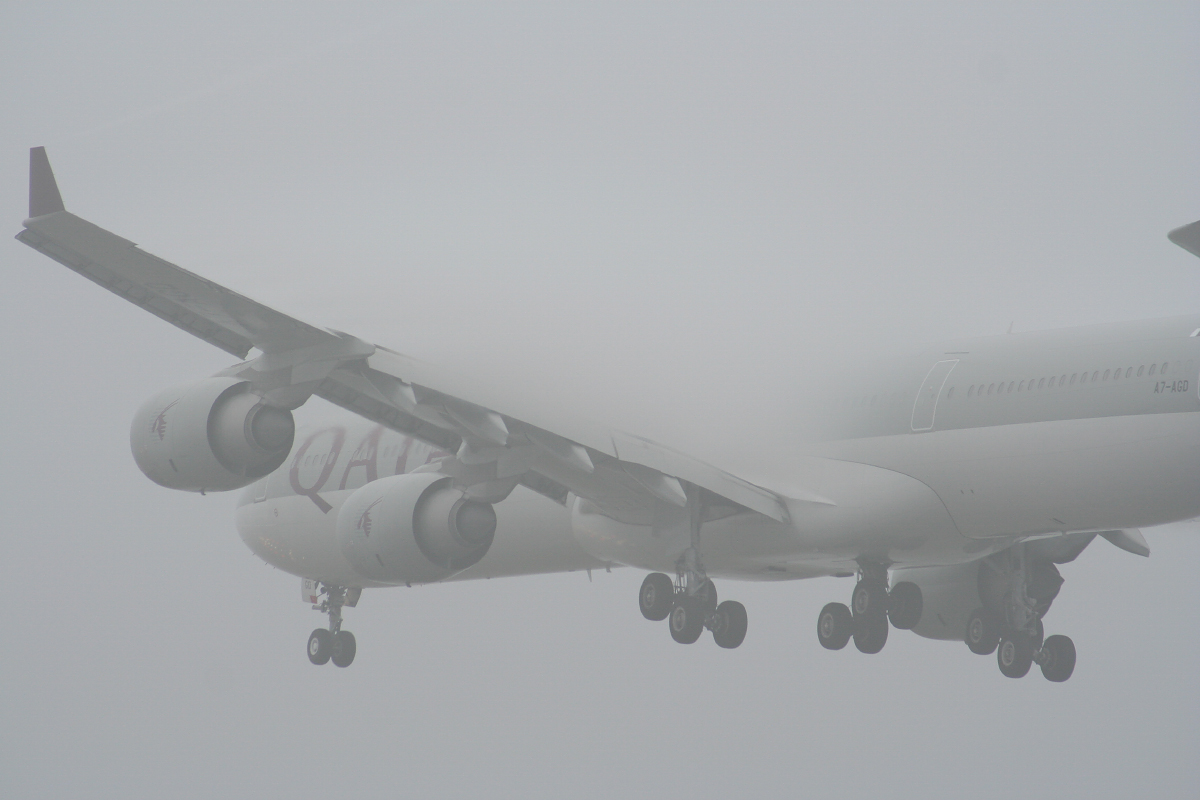 Since there was no point in taking sideshots or aircraft-only shots I tried to find the best positions to get shots that make you feel the action and the ground proximity! Because it is really damn close! Last time David plugged his ears every time a 747 was coming in! So I took mainly shots with the aircraft and the road. 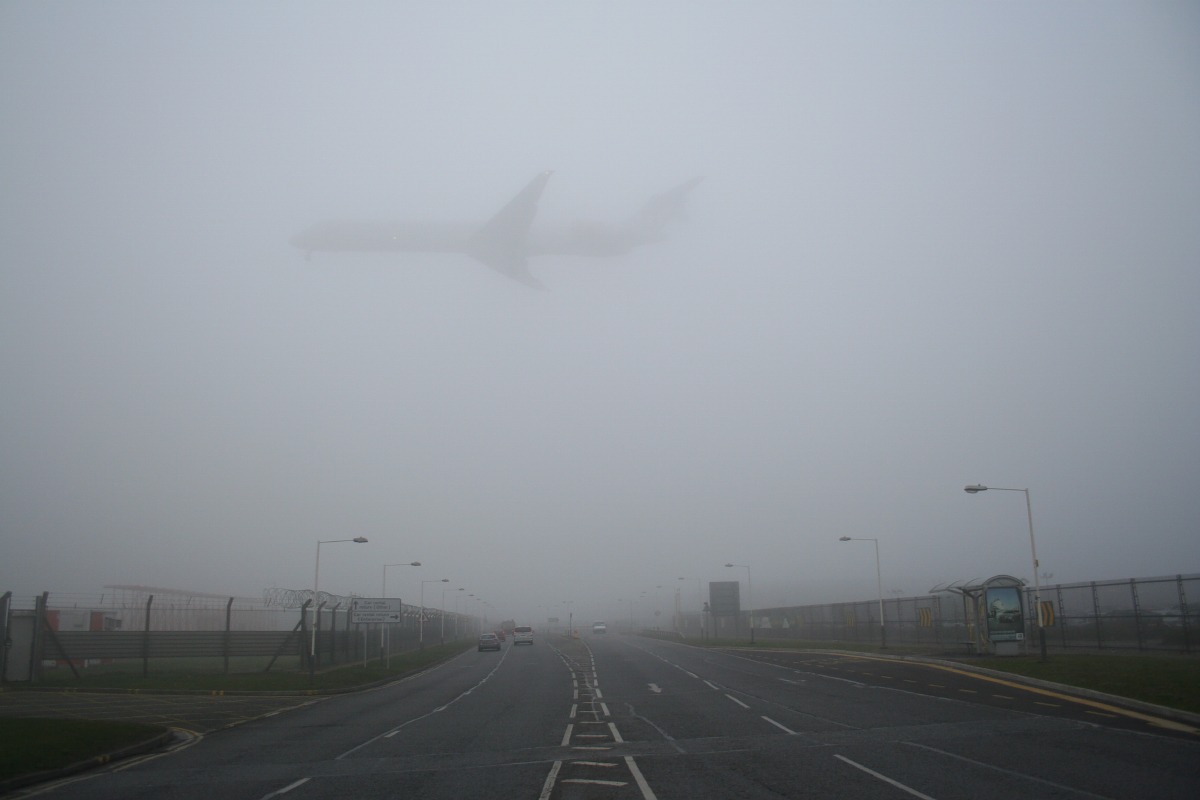 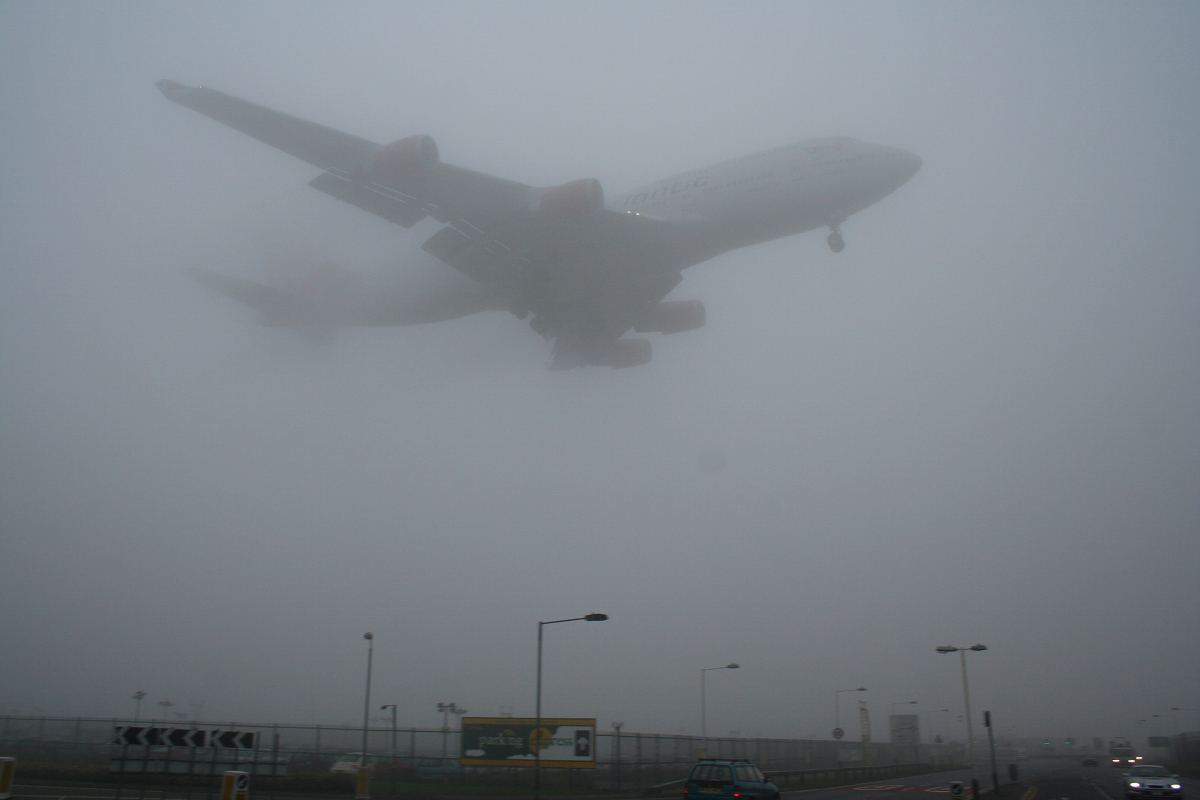 I moved around a little, getting fired in the afternoon from the long stay car park, following the fence to the closest you can get to the threshold of rwy 27R.. I didn’s see the time pass.

At 2:30 I took the 175 to Hatton cross to get ready to shoot from myrtle ave since the switch the runways between 27L/R every day at 3pm. I forgot to say: ‘they are SUPPOSED’ to switch because that day, they didn’t. I think that is the kind of luck I have. Fortunatly I met a guy working at the BA’s maintenance centre so I could spend a little time to talk to him. As we were watching the aircraft landing on 27R and waiting for the tower to switch the RWY, passed 777 Air India in special colours, some Virgins, Yemenia 737, Air Canada 777, jet airways 777… He showed me the place where the BA 777 crash-landed only a month ago (I came to the place last time only two days after so the doomed 777 was still on the grass but I couldn’t see it because of the dark). It was really frightening when you realise the plane missed the southern perimeter road only by 9 metres and landed just behind the fence (taking in fact that even normally the planes pass low over the road) so I tried to imagine the scene and it was a very strange feeling. He told me about a special Korean Air cargo but I didn’t believe I could catch it. Well the guy was equally dissapointed there were no planes and went to his car saying ‘see you later’, which was quite funny! 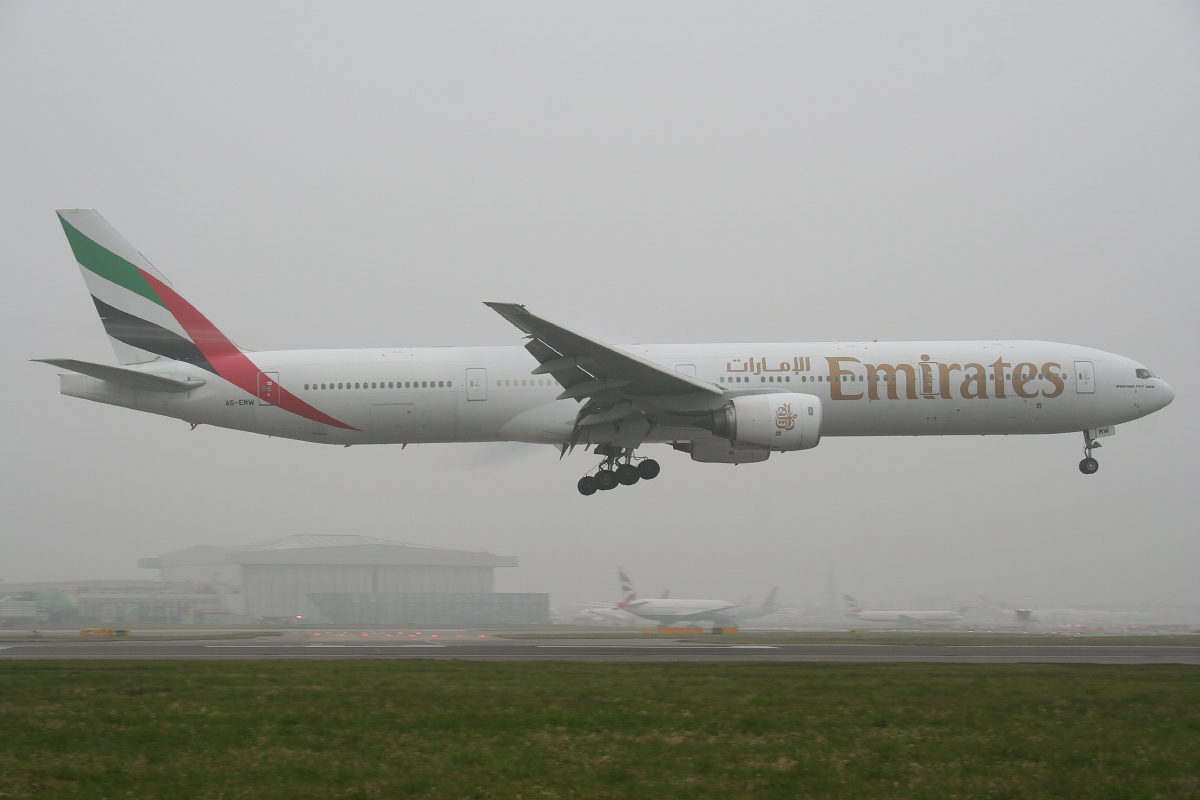 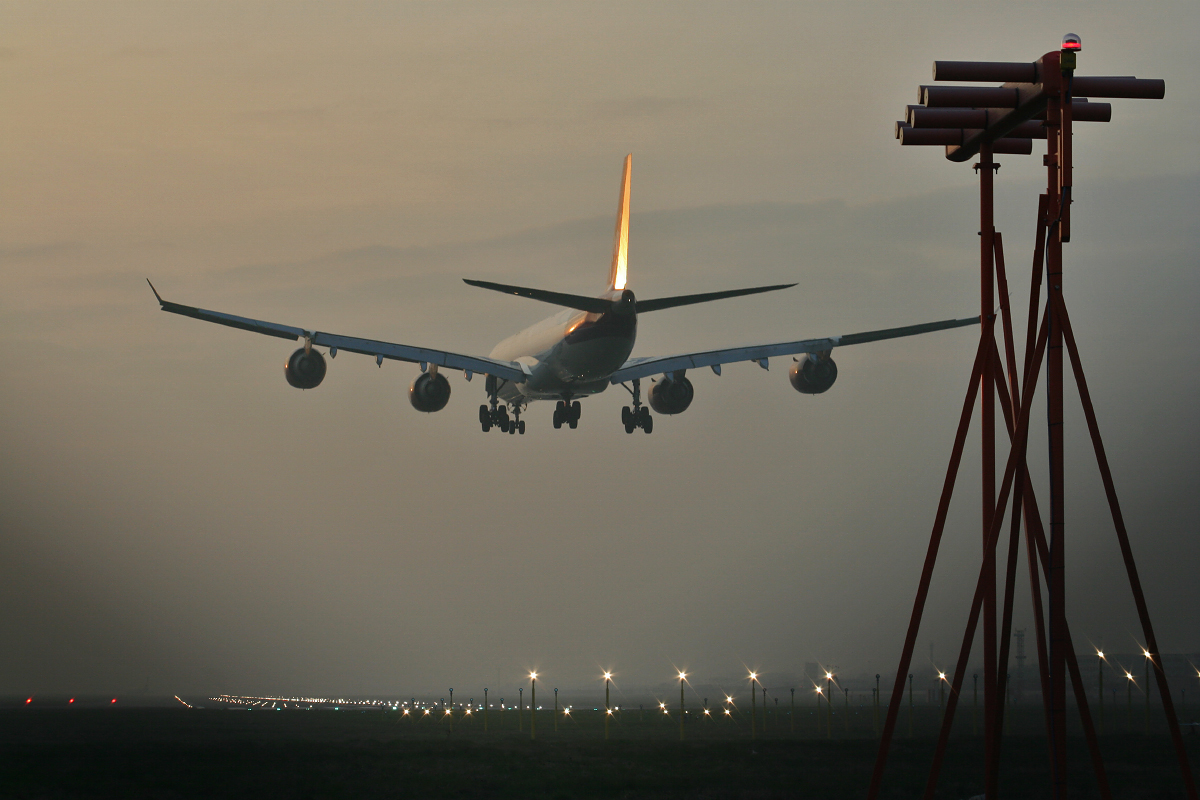 The Korean Air 744 came as the cherry, with a beautiful ‘Louvre’ paint job with a picture of ‘La Joconde’ on the rear part of the fuselage with stylish korean graphics! 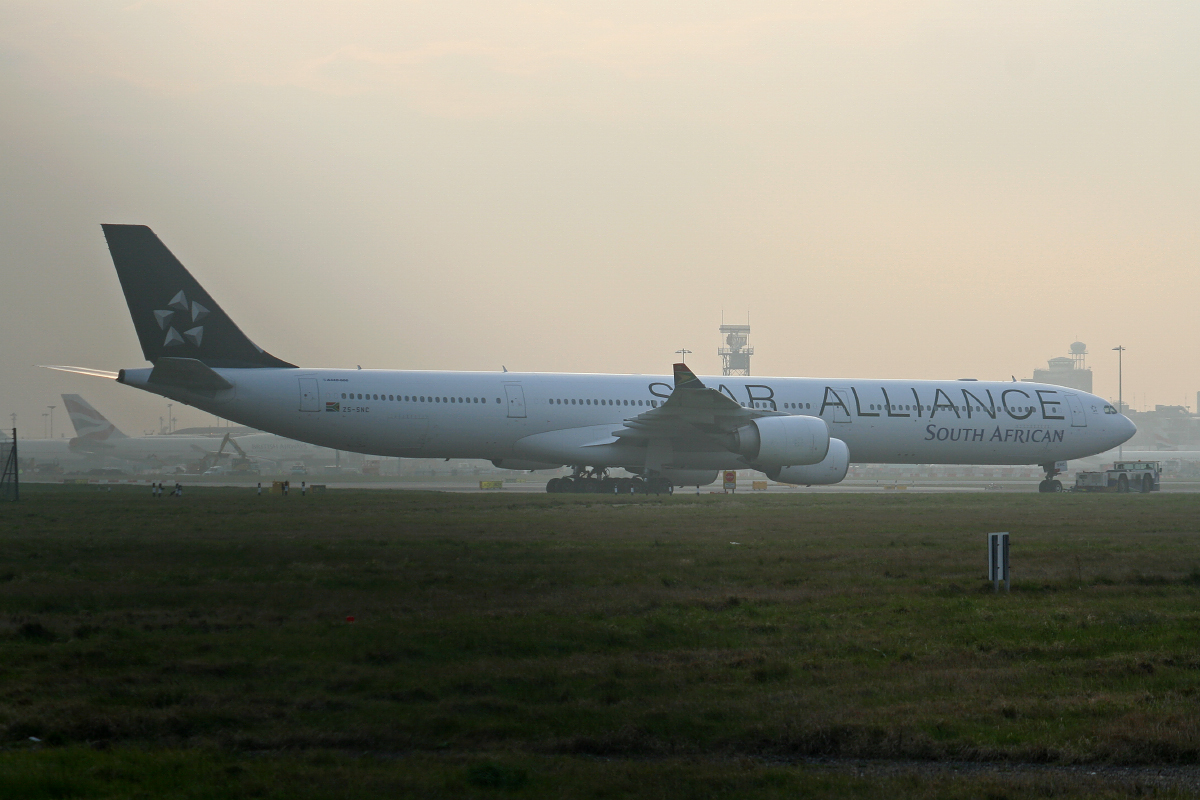 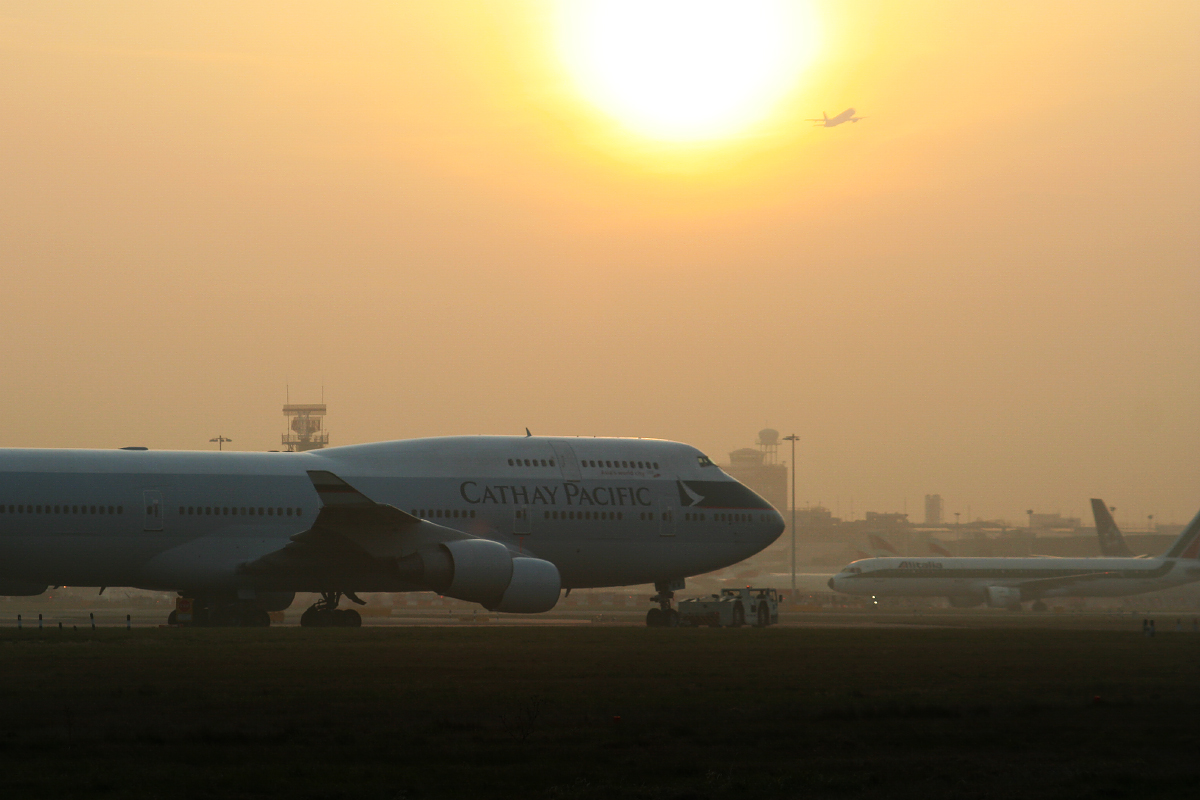 Once the night came I returned to the terminal and chilled for nearly 12 hours before catching the first underground to victoria of the day at 5:14am. Once at victoria I bought some magazines and chocolate and took the bus to Stansted (again not the one I was supposed to take thanks to the cool driver). I spent some 5 hours at the airport, got my shoes X-rayed at the customs and took my -800 back to Grenoble.

After playing around with levels to see the extent of the condensation, this came out. Enjoy 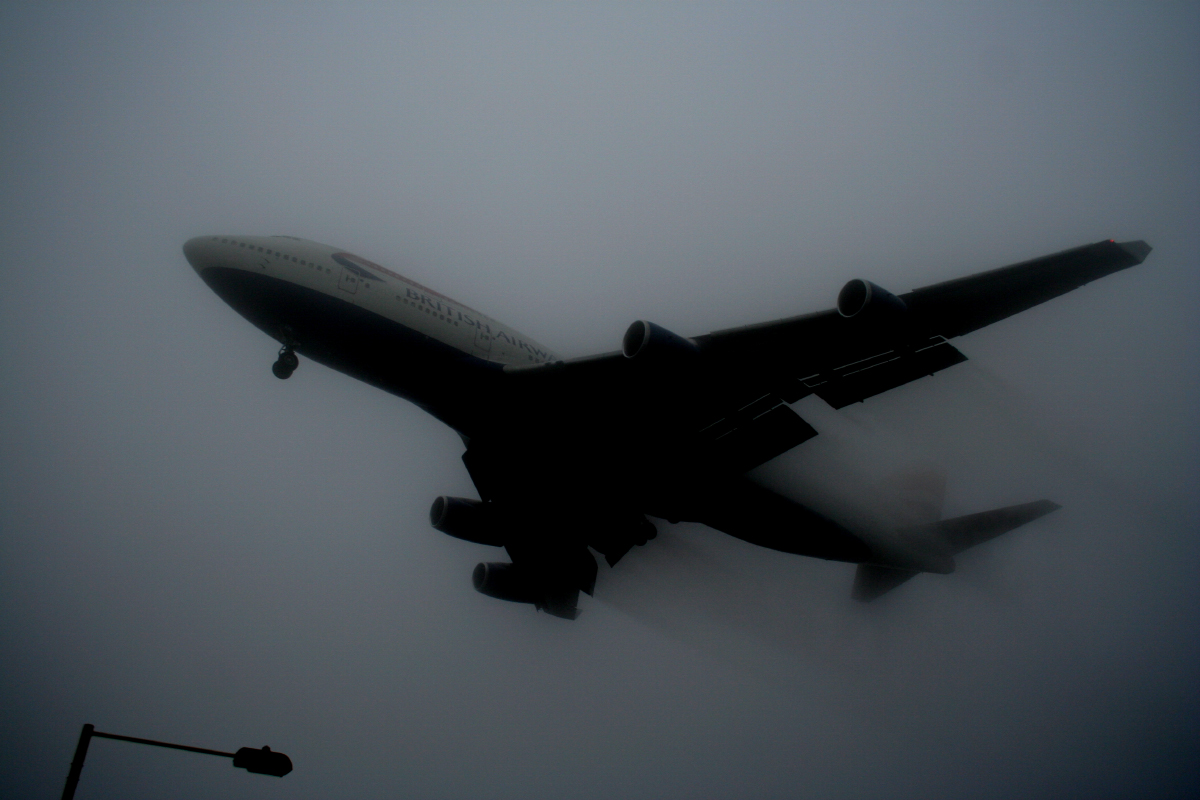 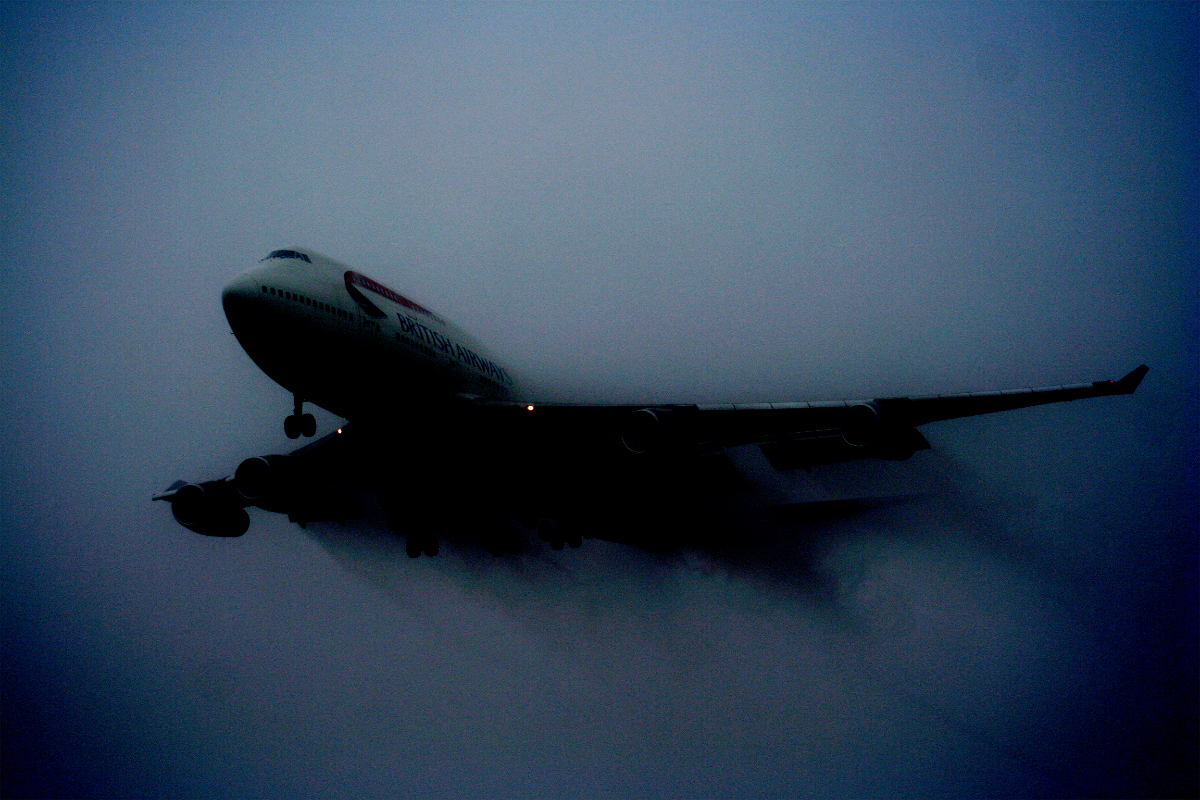 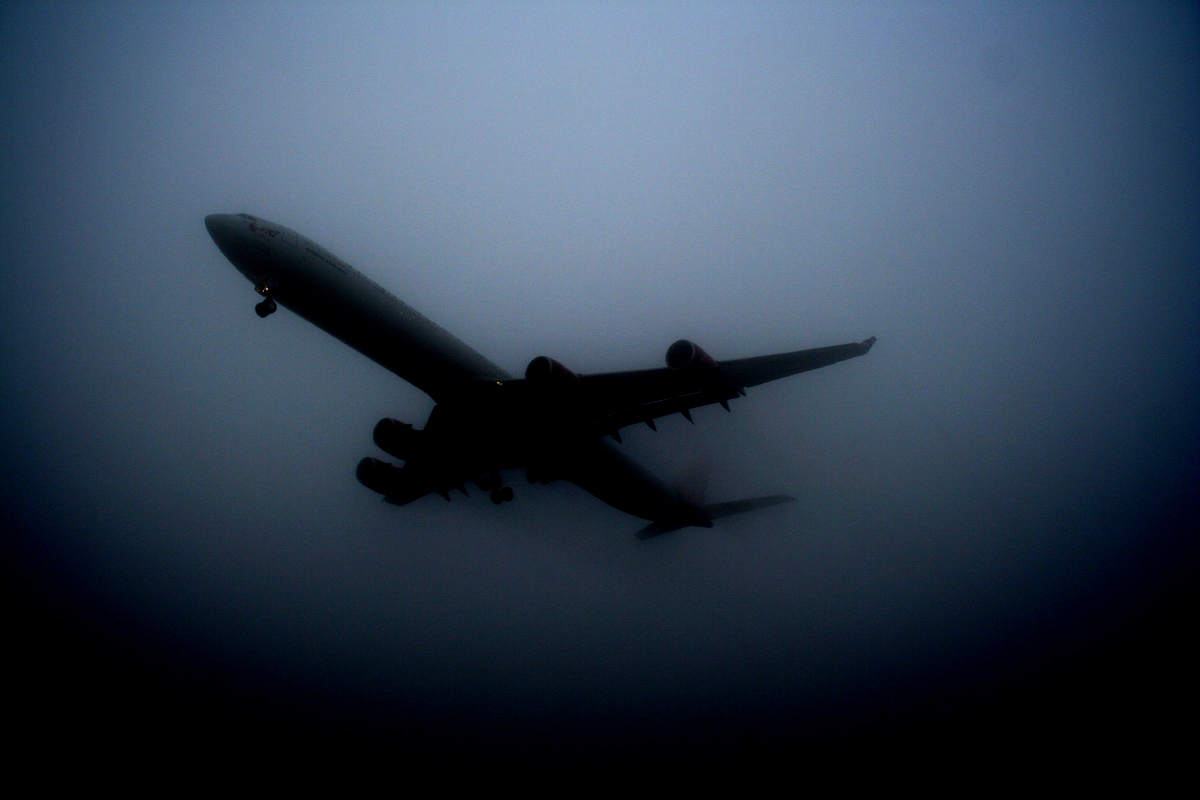