There are some things you can only do once. Whether it is meeting someone for the first time, or having spaghetti bolognaise with a glass of red wine while wearing a white shirt. Today, I’m going to talk about an unexpected simulation situation, and my reaction to it.

Multiple times, I had adream about being in an commercial airplane and having to step into the cockpit and landing the aircraft after the pilots got ill. I can’t remember how the dreams end though. I always wondered what it would be like to try a similar scenario in a real simulator. Well, there was only one way to know…

As far as I can remember, I always wanted to be a pilot. Only problem, I got glasses from a young age which put that to the side. Since that didn’t work out, ever since we had a somewhat powerful computer at home, I was hooked up on the sim, from about 1998.

I got my hands on most of the major MS Flight Simulator versions, the 2000 with the Concorde, then later the 2004 version, on which we spent hours with my friends Andre and Hory flying multiplayer on IVAO. Hory was the most serious of us and used to work the tower at PRG airport. He is now director of the czech IVAO division director.

At that point, around 2004 I wasn’t flying on the keyboard and mouse anymore, as I got a decent joystick. I kept flying with the latest FS X version and played around with many add-on airplanes and sceneries, my favourite being the PMDG 737 and the Kai Tak enhanced scenery. I probably did the VHHH – VHHX a few hundred times. I also liked to takeoff from Seattle Tacoma and land at Boeing field – it was a 5 minute flight almost exactly in a straight line. Great for practicing landings.

Around december of 2016, I thought it would be nice to try one of the real life simulators. I quickly found a company called Aviasim who have an A320, 737, helicopter and f-16 simulators in Lyon and other cities across France. It wasn’t long before I booked a 1 hour session on their 737 sim. Since they have many clients, the closest I could schedule a session was in february, so I quickly locked it in. Now the question was, would I be able to land the plane?

Setting up the scenario

On wednesday morning, we took our morning bus from Grenoble with Loic. Aviasim is located in Villeurbanne, Lyon, about a 15 minutes metro ride from the centre. 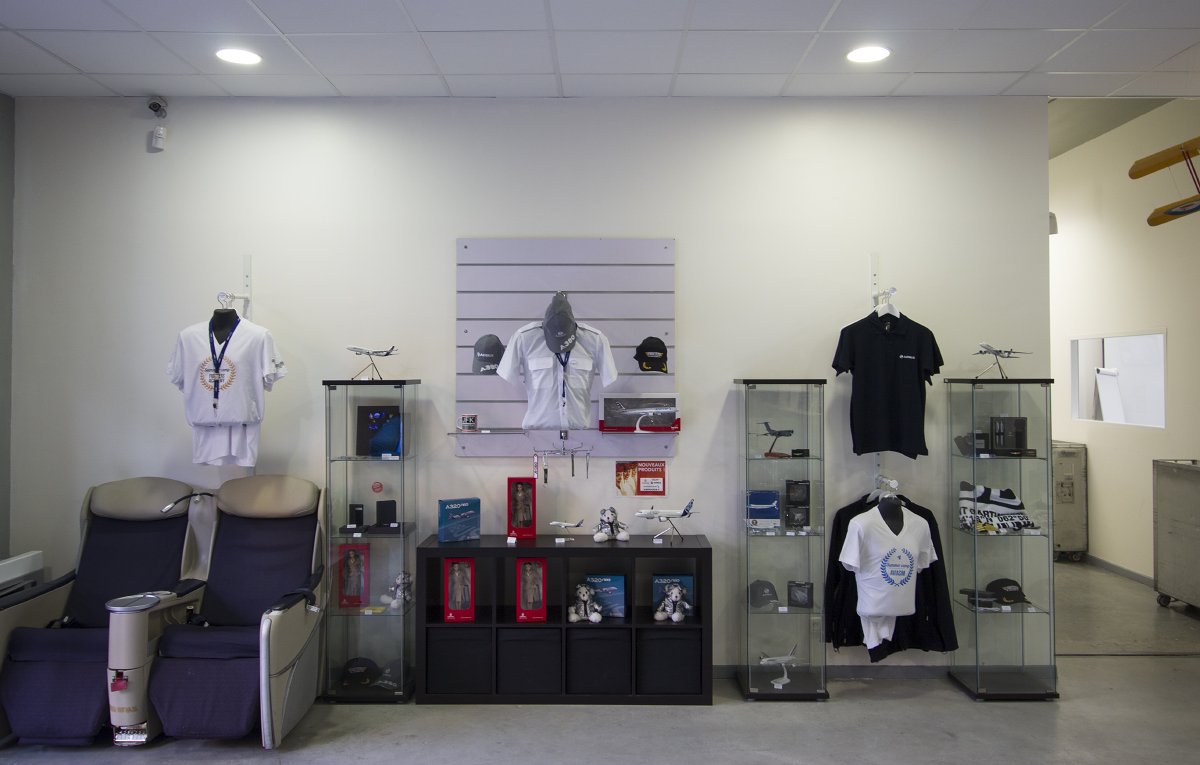 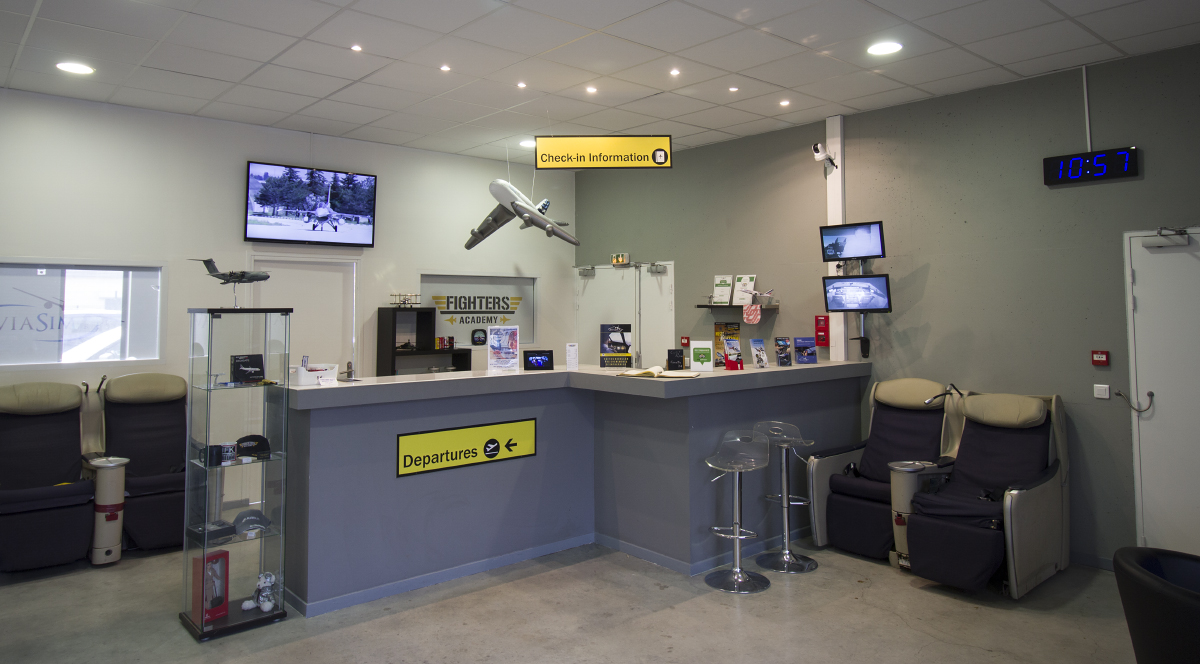 My idea, if it was possible, was for him to initiate the simulator and put us somewhere in the air close to an unknown airport in an “unknown” configuration, at which point we would get into the cockpit, with my friend Loic as the copilot, and try to land the airplane. I asked our instructor if it was possible for him to take the role of a controler, give us instructions and guide us through the landing as if this was a real life situation and two passengers took the controls after the pilots were unable to fly. He agreed and seemed definitely intrigued by our request, after I confirmed him once again that we didn’t want any instructions. But he also seemed to enjoy the idea! As far as I know, such a situation has never happened in real life so far.

After I stepped out the simulator and waited a few minutes outsite for it to get prepared, Loic called me back to the cockpit, I took the captain’s seat, and it was on!

We were KLM 231, at 3000 feet and 220 knots, flaps 5, flying over the sea with an island in front of us. The second I took the controls, it was suddenly very overwhelming, and felt very real! Loic immediately contacted the tower and declared an emergency, explaining the situation. We had an airplane full of passengers and we needed to get it safely to the ground!

I managed to get a grip on the controls and stabilize the speed and attitude, and we flew towards the island for a few minutes. Meanwhile, Loic was asking for more instruction about the landing ahead of us. Apparently, we were going to Princess Juliana, and soon received a first set of instructions from the tower:

I read back the instructions (not without asking Loic to remind me our callsign) and executed the left turn, while gaining a few hundred feet. It was definitely harder than I expected to do it smoothly. The runway quickly came insight, but we were too high and not aligned properly.

As we were vertical over the airport, ATC gave us instructions to enter a right hand circuit. After a few minutes, I noticed my hands were beginning to be tense from the constant pressure on the yoke and trying to maintain the altitude, so I tried to relax them.

We circled the airport, and we were soon in the wind going for a landing runway 10.

Instructions were to set full flaps and maintain 150 knots for the approach. It could feel the nose drop as the flaps were coming down. We soon got runway in sight, and the moment of truth was approaching fast. We had the PAPI lights to help us for the glide path, but as we were getting closer to the runway, I was having a difficult time maintaining the descent rate, and had to get the nose up several times as we were a bit too low our final approach. I could definitely feel the inertia of the plane, and knew I was overcorrecting since we were sort of oscillating between a bit too high and a bit too low.

As we were just a few hundred metres from the beach, I thought we weren’t perfectly aligned with the runway and considered going around. As I managed to correct it, I decided to continue the approach.

A few seconds later, we were over the runway, a bit to the right from the centreline over the runway but at a good descent rate and the automated ground proximity starting counting down.

I retarded the throttles and started to flare. “Ten”. Touchdown, reverse, we were on the ground!

Only problem, the simulator didn’t have rudder pedals so we couldn’t brake! As we were reaching the end of the runway and still had speed to bleed out, Loic just put the parking brake on a we stopped just a few hundred metres from the end of the runway, on the grass since we couldn’t steer either. We were later told we could steer with the yoke, a bit too late!

After catching my breath, I turned back to our instructor and asked him the dreaded question, if he though we would have survived. He said “Yeah, it was a pretty good landing!”

I wanted to try to land in Kai Tak before handing the left seat to Loic and let him fly a bit too. Our instructor offered to put us at the new Hong Kong Chek Lap Kok airport and make us fly the short hop to Kai Tak.

After a quick takeoff from runway 07L, we flew over the Tsing Ma bridge and soon had Kai Tak in sight. We were asked what runway we wanted, and the choice was obvious: runway 13 with the famous checkerboard, or as passengers apparently referred to it, “The Kai Tak heart attack”.

The runway 13 approach starts with a descent heading northeast. After passing of the harbour, the flight path goes over very densely populated areas of Western Kowloon. The huge aviation orange and white checkerboard is used as a visual reference point on the final approach. The pilot needed then to make a 47° visual right turn at a height of about 600-1000 feet to line up with the runway and complete the final leg.

As we got into the first leg of the approach, we were already in landing configuration, full flaps, trying to maintain 150 knots at about 2500 feet. I can distinctively remember how hard it was to get a feel of the altitude in the area. The city is covered in buildings with different hights, and has many hills, and it was also a bit difficult to see over the autopilot panel because of the pitch angle. The checkerboard was straight ahead with the runway getting closer and closer on or right. I didn’t notice them at first, but the instructor told me to use the ground lights outlining the turn. Making the turn was definitely hard, especially keeping the speed with the constant variations of pitch. I undershot the turn a bit but got back on track as we passed the displaced threshold, touched down and stopped the aircraft, on the runway this time, with plenty of length to spare.

So how does it all compare to a home sim?

Their 737 simulator is based on FSX, which from what I heard has a pretty decent flight model. It does feel very real, and I would assume they have made some tweaks to their 737 behaviour and parametres. I wonder though how it compares to a real pilot training flight simulator.

What makes the whole difference is the actual cockpit, it really does feel like you’re in an actual aircraft, with all the knobs, switches, panels and displays. 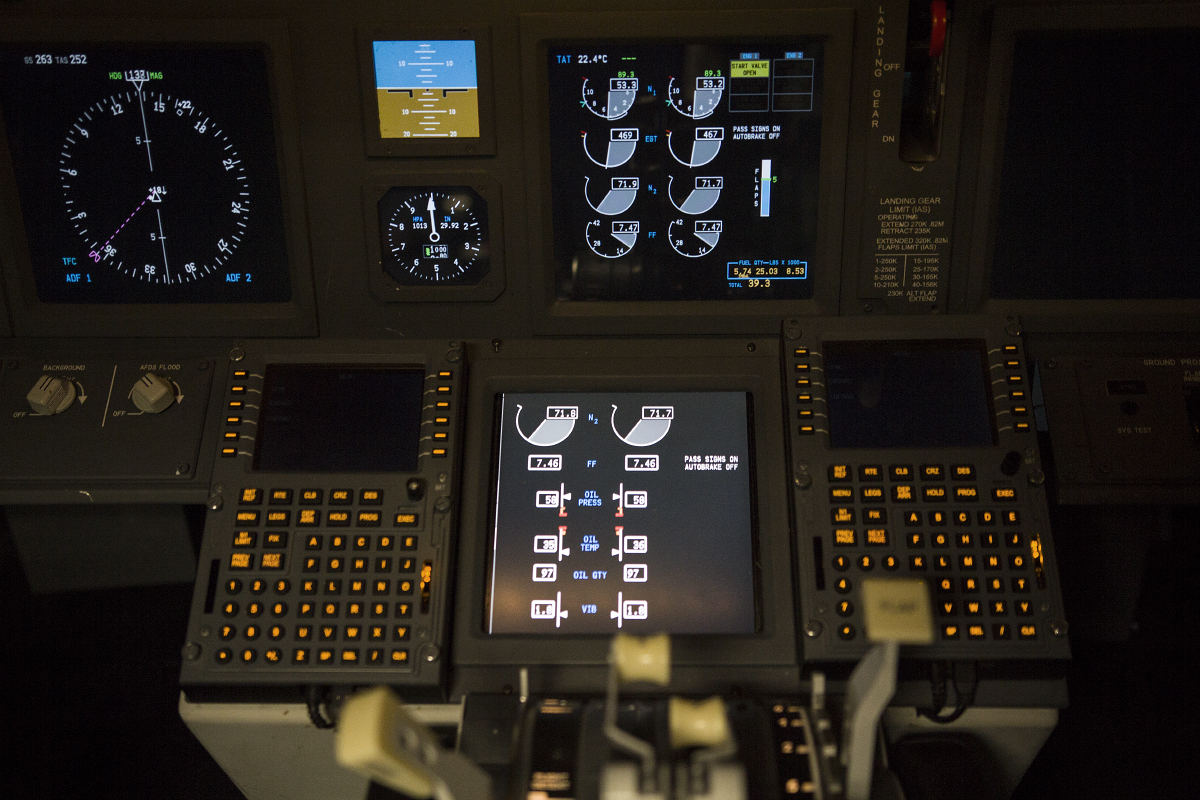 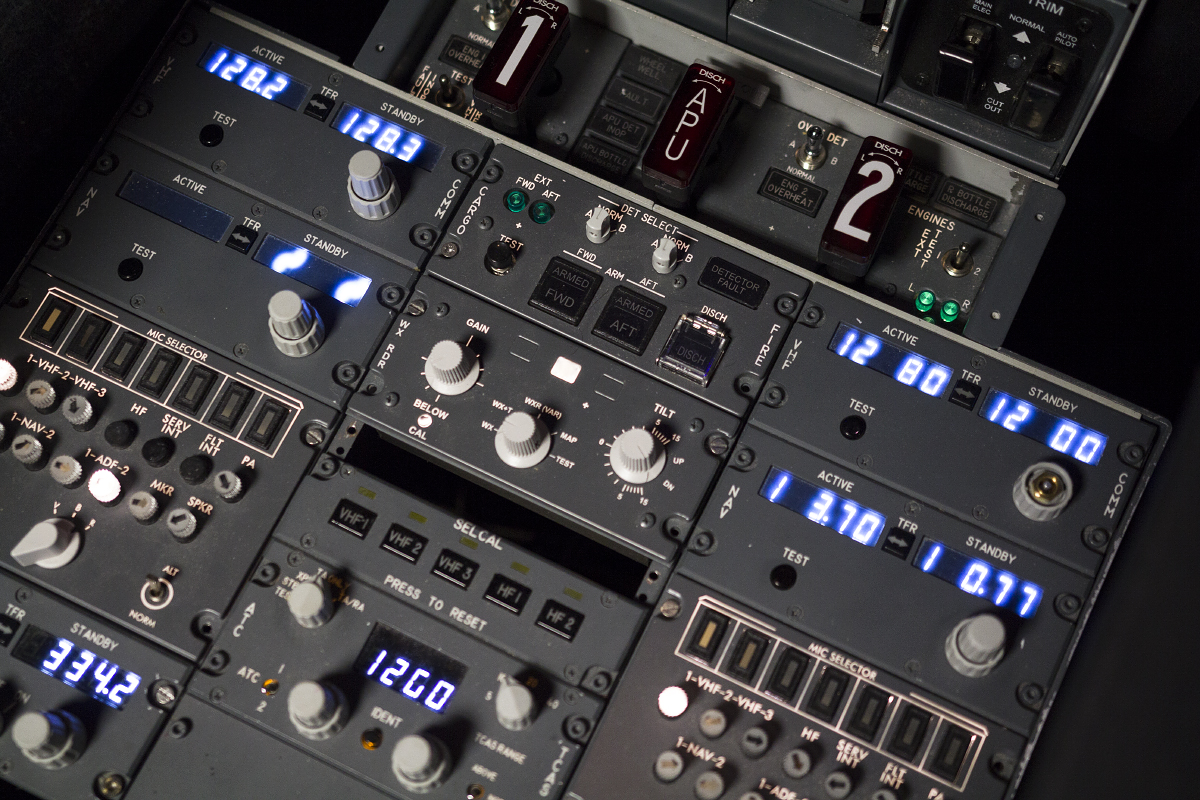 It is also dark, you can control all the instruments and not having all all the information and instruments right in front of your eyes like in FSX does make a huge difference. It’s also physical, you have to moove around, look around, flip switches and hold the yoke and manipulate the engine levers. And calling out the speeds and raise the gear after rotation sure feels great! 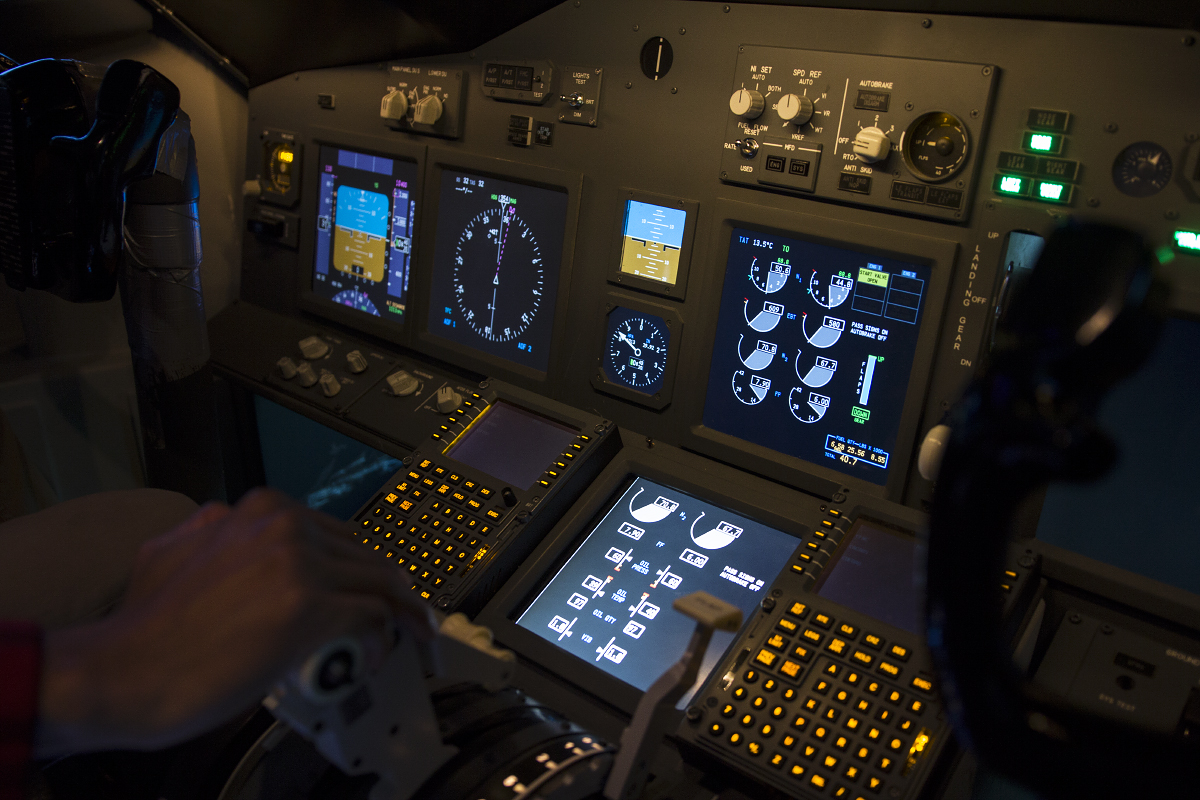 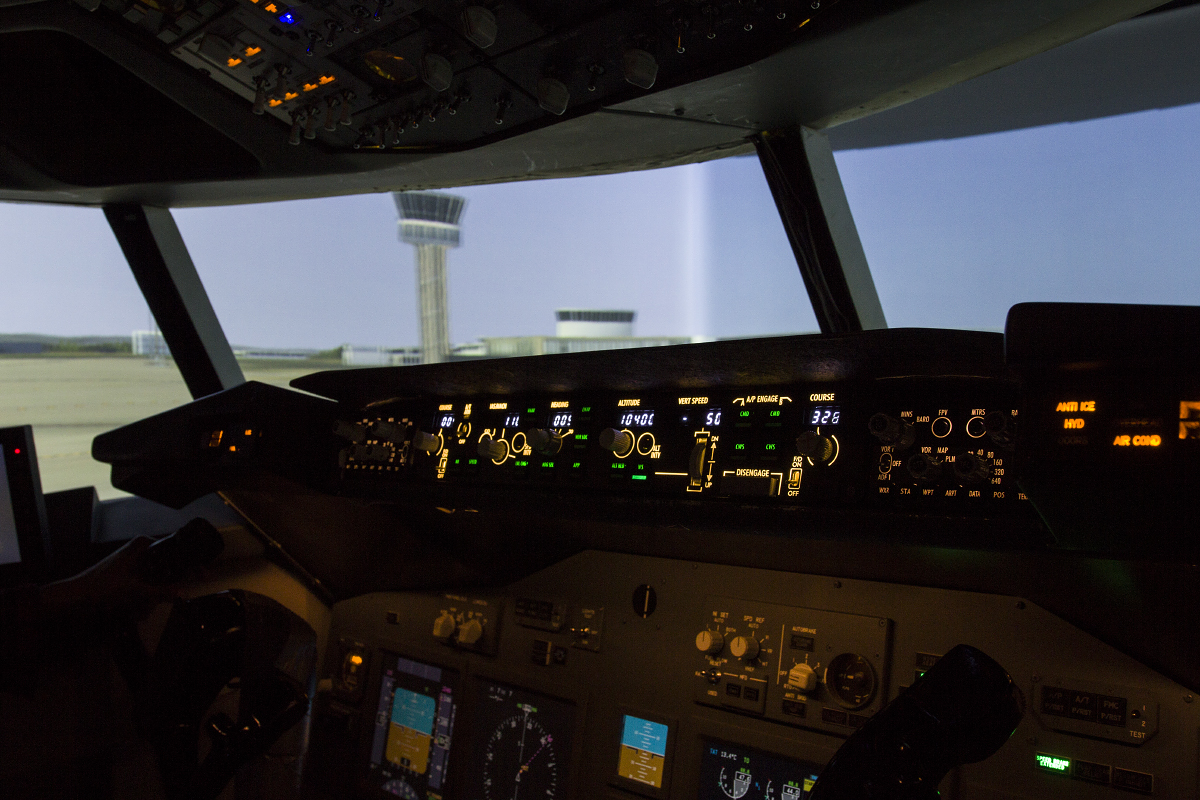 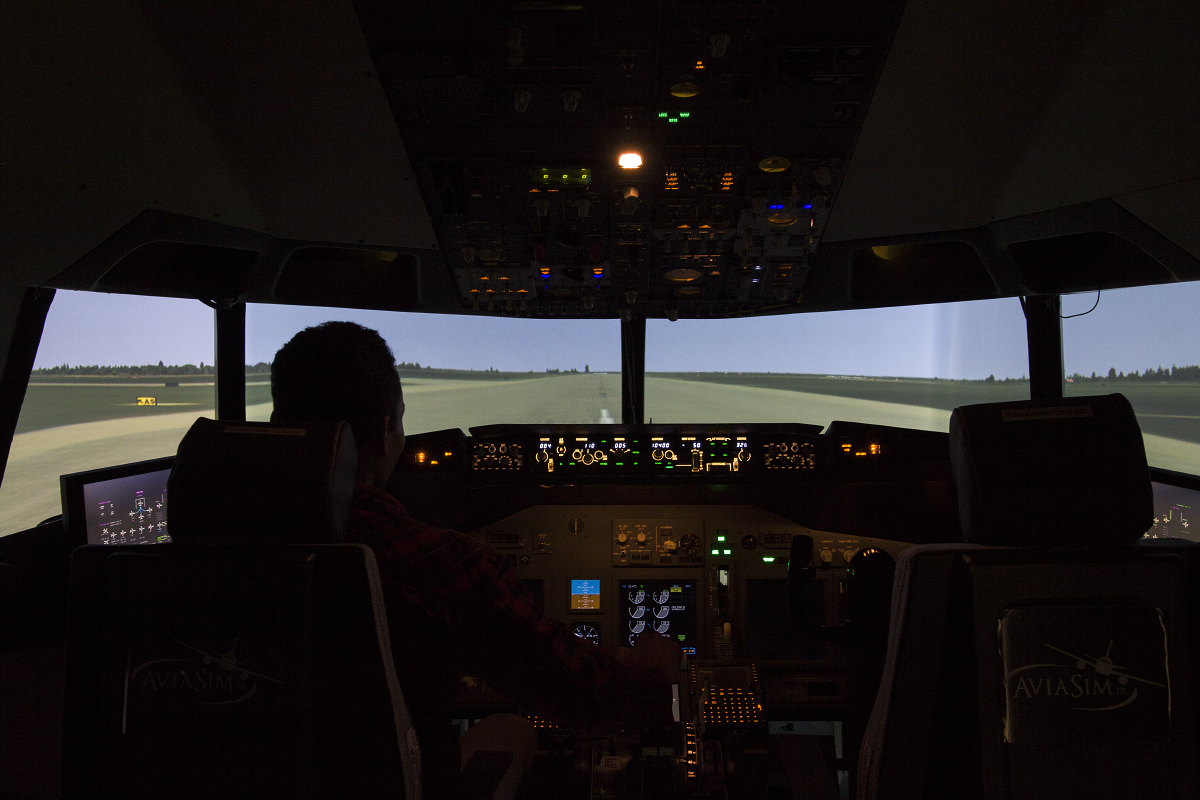 This simulator, regardless of whether the flight model is accurate or not, gives an interresting glimpse into how much work it must be to fly an airliner in real life. My previous home simulator hours must have helped, but this was definitely a different beast to handle. I also think not having Loic, who has a private pilot lisense, in the right seat, would have made it a lot more difficult.

What would happen in real life, with real people in the back, vibration, engine noise and confusion? Who knows… But I don’t think this would serve as any evidence anyways. One thing is certain though : it was a wild ride.

A big thank you goes to our instructor who made our little fantasy scenario very enjoyable! 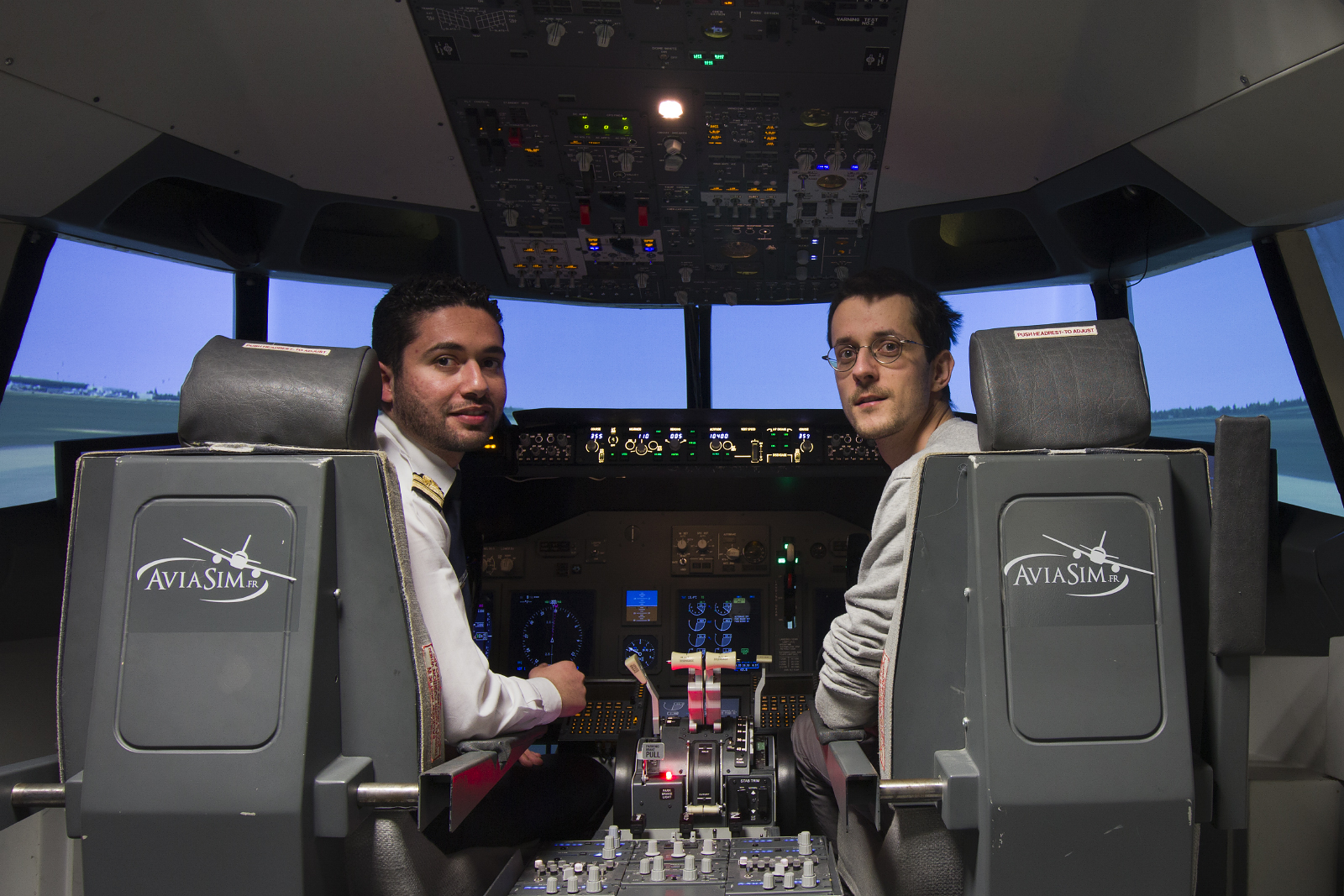