In 2008, while still in high school in San Francisco, Luca Iaconi-Stewart set out to build an Air India 777-300ER model using only paper, more specifically, manila folders. His building techniques are unique in many ways, like drawing the plans, cutting an endless number of tiny parts and assembling functional aircraft mechanisms. The model, that according to Luca is still “work in progress” today, shows very fine craftsmanship and dedication, as you are about to see. I’m very thrilled to present you this interview with Luca!

Origins of the project

Philippe: What is your design and model making background?

Luca: I’m self-trained, though I’ve always been creatively-minded. As a kid I was always building or drawing and was fascinated by machinery. I used to do really intricate drawings of trains before I became interested in aviation. As it relates to my models, though, I took an architecture class in high school where I learned the basic modeling technique that I’ve perfected over the years.

I like the proportions and the looks of the -300ER, and I tripped across a detailed AI seatmap online that made designing the interior much easier. Plus, I think they have a beautiful livery.

What motivated your choice of manila folders?

I first used them in an architecture class to build very rough mock-ups, and I just loved the way the paper felt. I liked the challenge of being constrained to a single material and having to make it both as stiff and as flexible as possible, and I soon learned that the possibilities are endless. 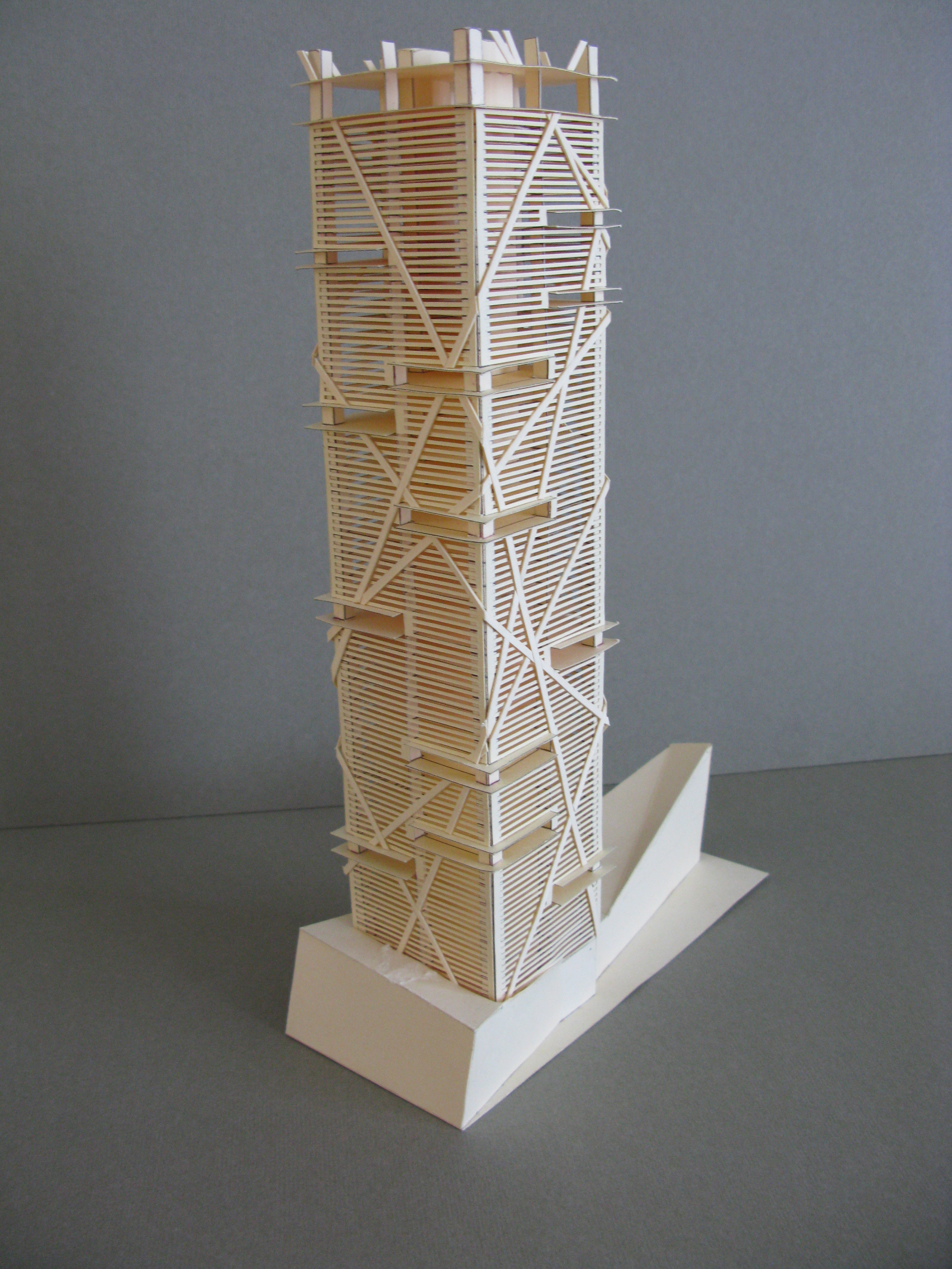 Your finished model contains an immense amount of detail and many functional mechanisms. What was the original the scope of project?

Well, I certainly wasn’t planning on making it as detailed as it is now. Originally, there were to be no moving parts and I was pretty much going for the “quick and dirty” approach, but I found myself unsatisfied with how sloppy it was and wanted to make it more realistic, so I started incorporating articulation to make it more true to life. The downside, of course, is that it’s still incomplete after almost 9 years!

Working on the model

Your landing gear behind the scenes time-lapse video gives us an insight into the actual part design. Could you describe the very beginning of the project and the planning involved?

I had no real plan at the beginning—I literally just decided one day to make a fuselage barrel section by looking at photos and tracing a can to get the shape of the circular cross-section. I seem to remember also finding some kind of computer drawing of the AI 77W that I printed out at full size (~48” long) and used in order to figure out how the spacing of the fuselage cross sections. As for the wings, I somehow hand-drew the sections/ribs based off photos I found, so they (unsurprisingly) turned out to be a mess and I scrapped them. It really was a hack-job in the early days, and once I got to designing the cabin, I realized that CAD was the only viable path forward.

What captivated me with your project, besides the complexity of the model and the fact you only used manila folders, was the realism and scale look. How did you deal with scale? Did you use 2D plans or create 3D digital models?

Well, as I mentioned, I didn’t have much of a plan originally, and the quality and realism suffered accordingly. I didn’t even have a scale ratio in mind when I started, it all just ended up being based off the 4.125” diameter of the can I traced, which works out to about 1:60. As the complexity increased, though, I started relying more on technical drawings, especially the training manual and the exterior dimension drawings from Boeing’s website. It has been a real challenge, though, because I don’t know how to do 3D modeling, and so everything has been designed and laid out in 2D, which can be a huge pain at times, though also a nice challenge. I also just think that I have a great eye for detail and I know immediately when something looks “off,” so I’ve been a stickler about the looks and functionality of the newer parts, making the model as a whole much more realistic.

Here’s an assortment of pics of various details: 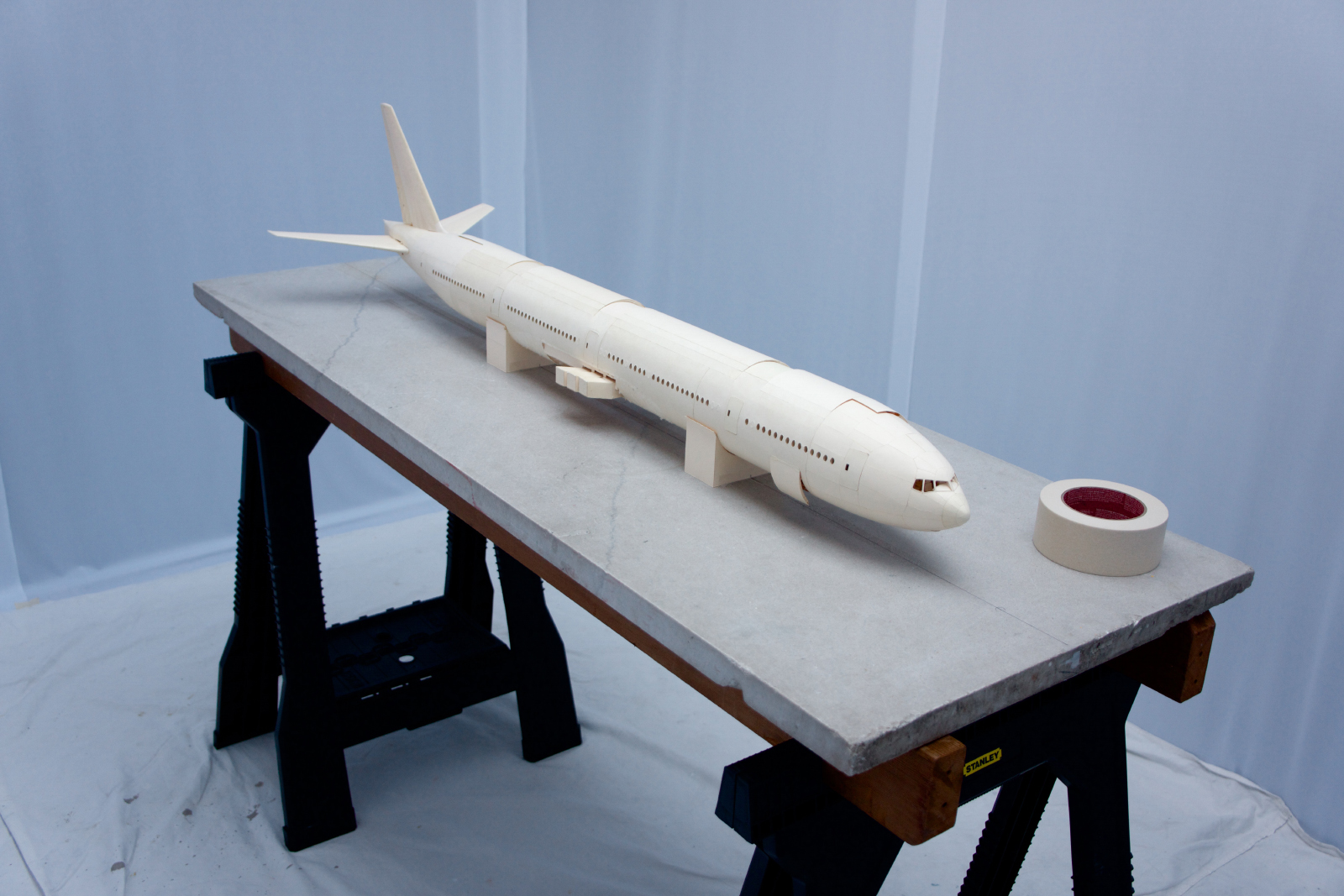 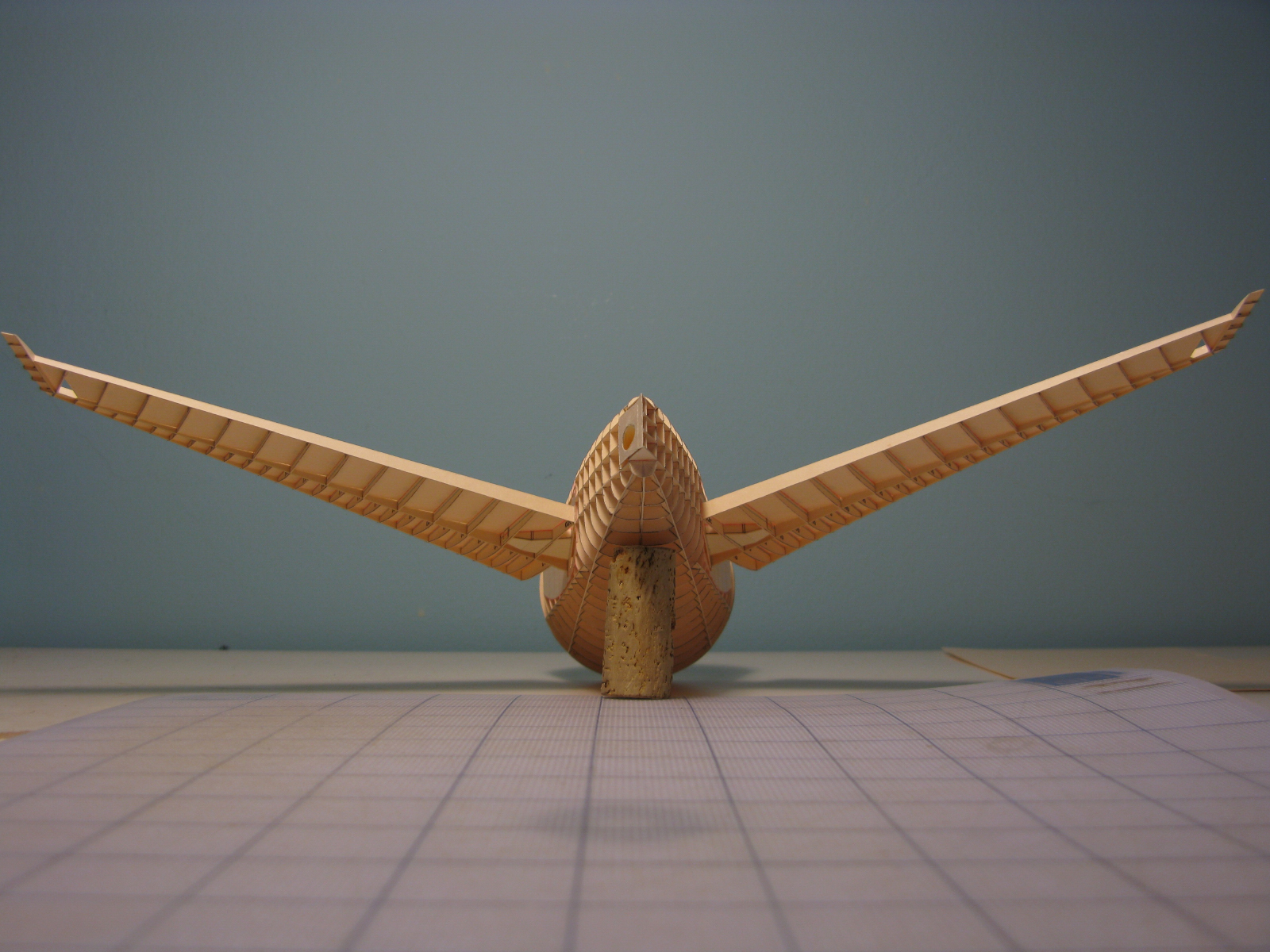 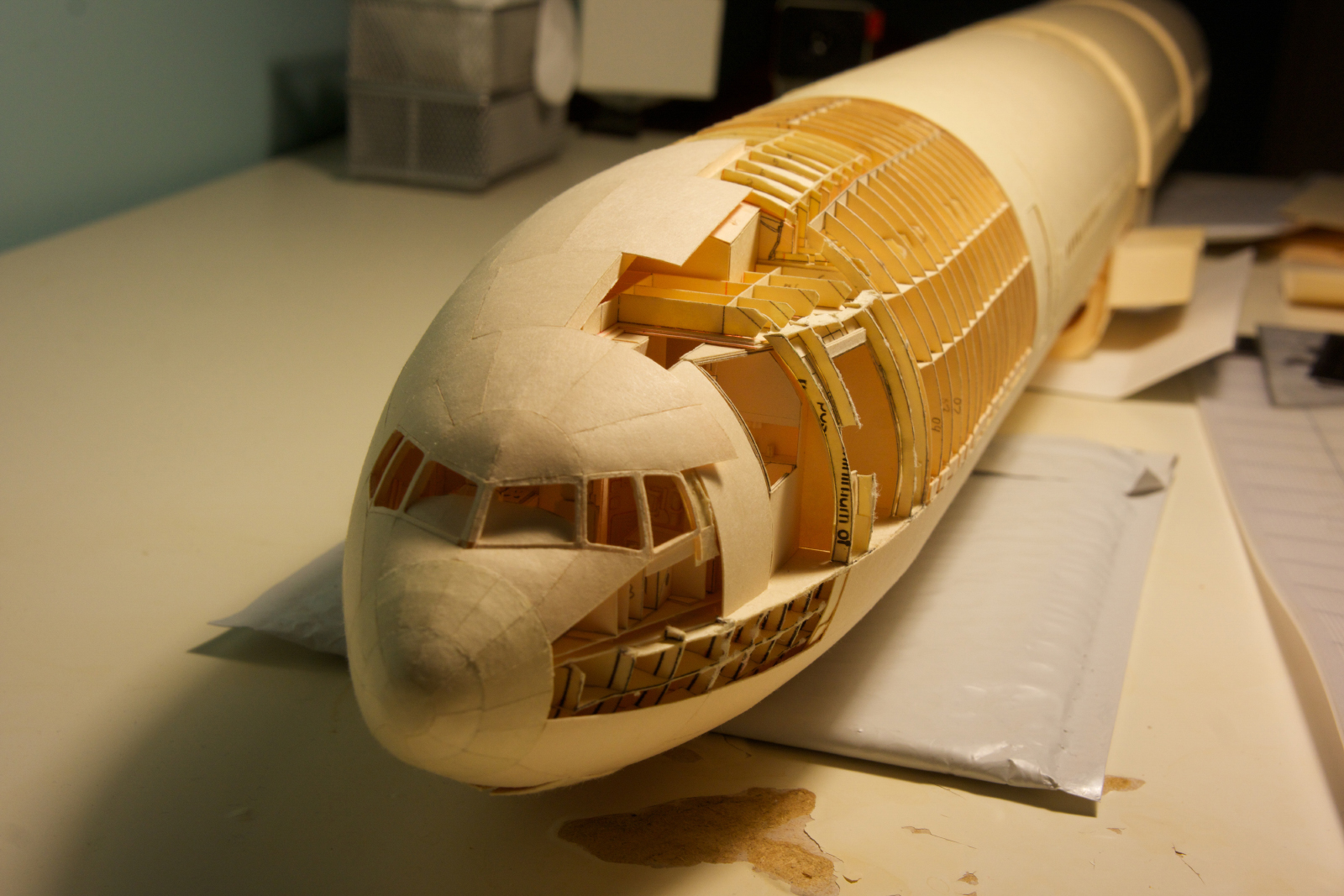 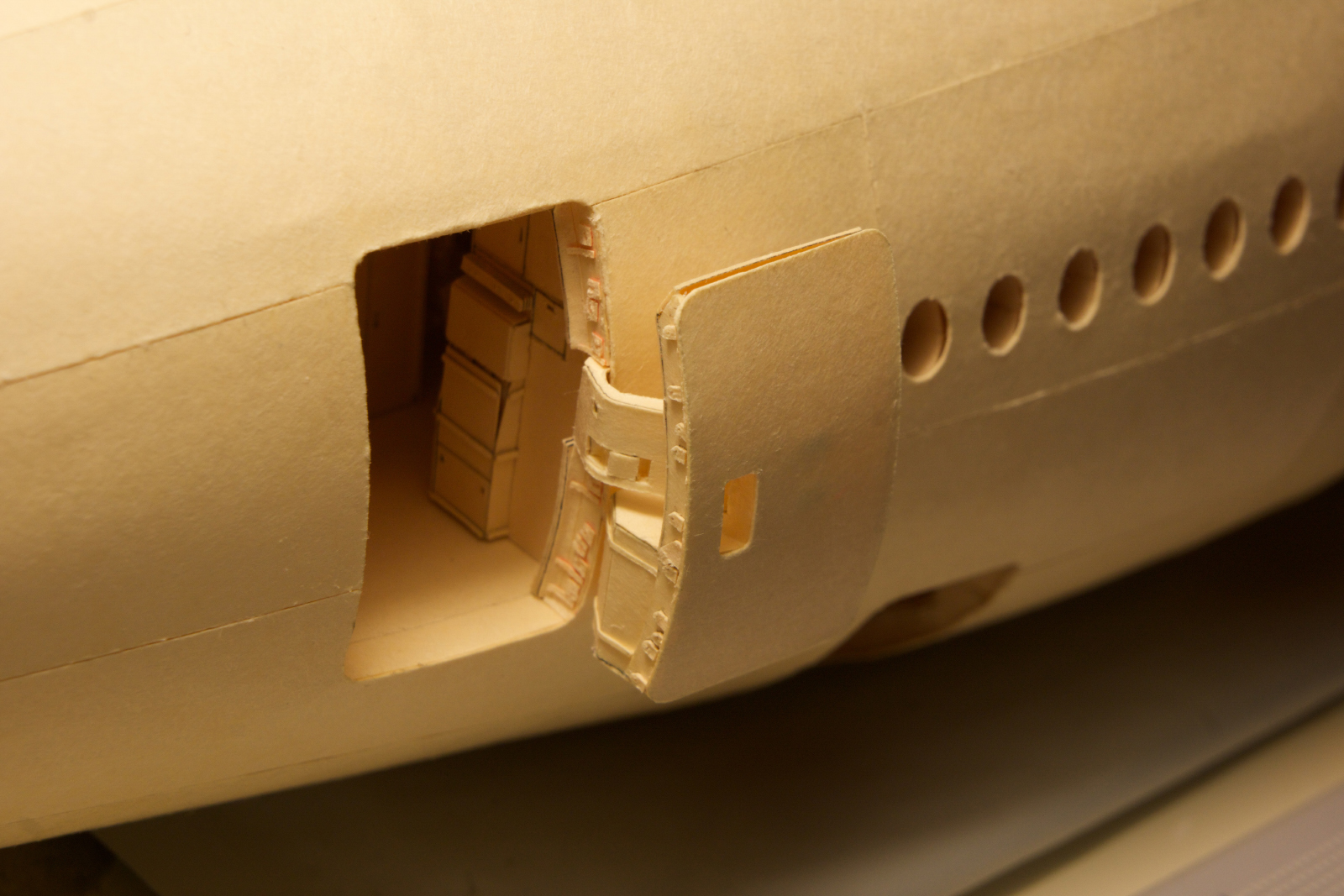 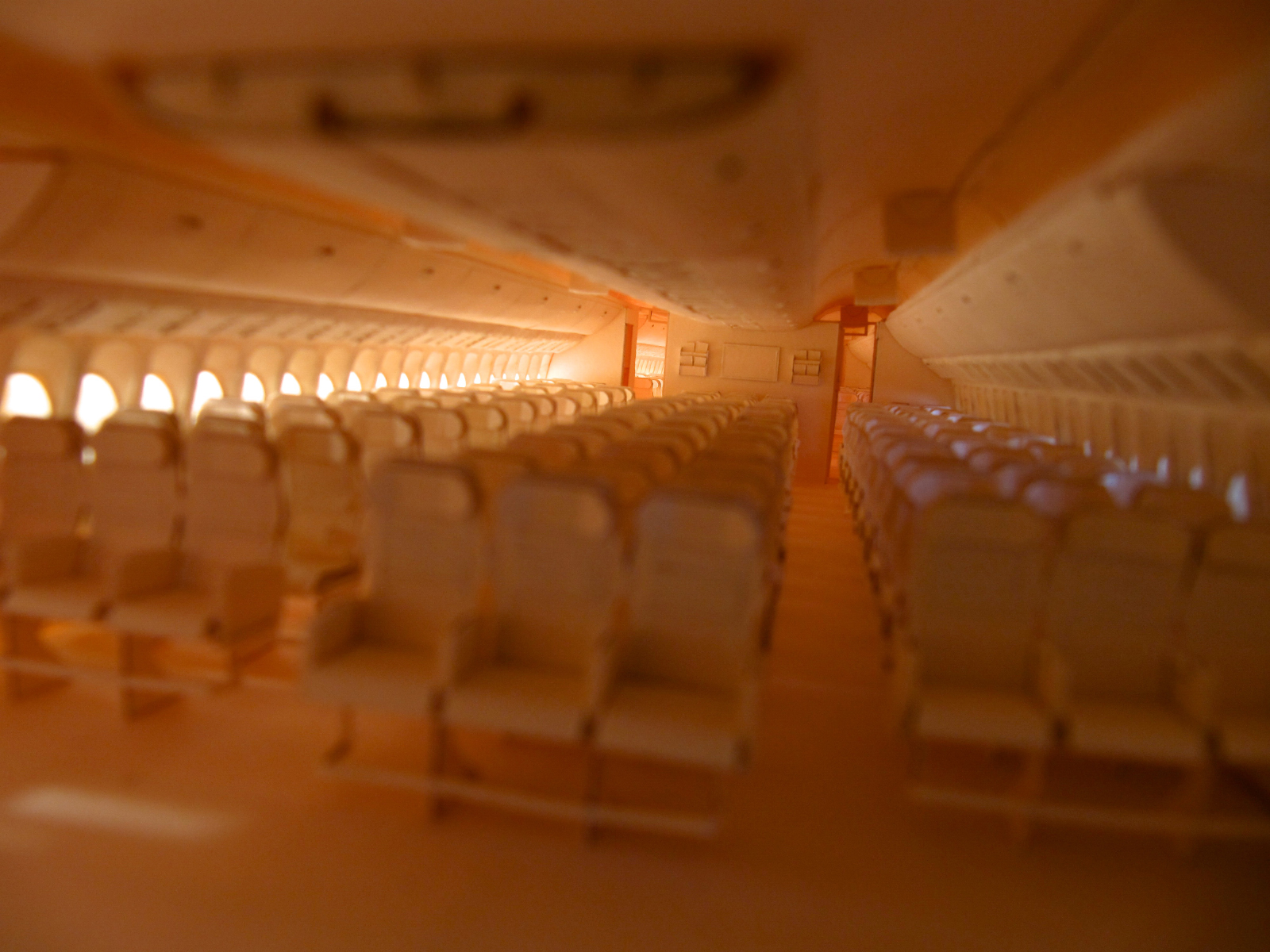 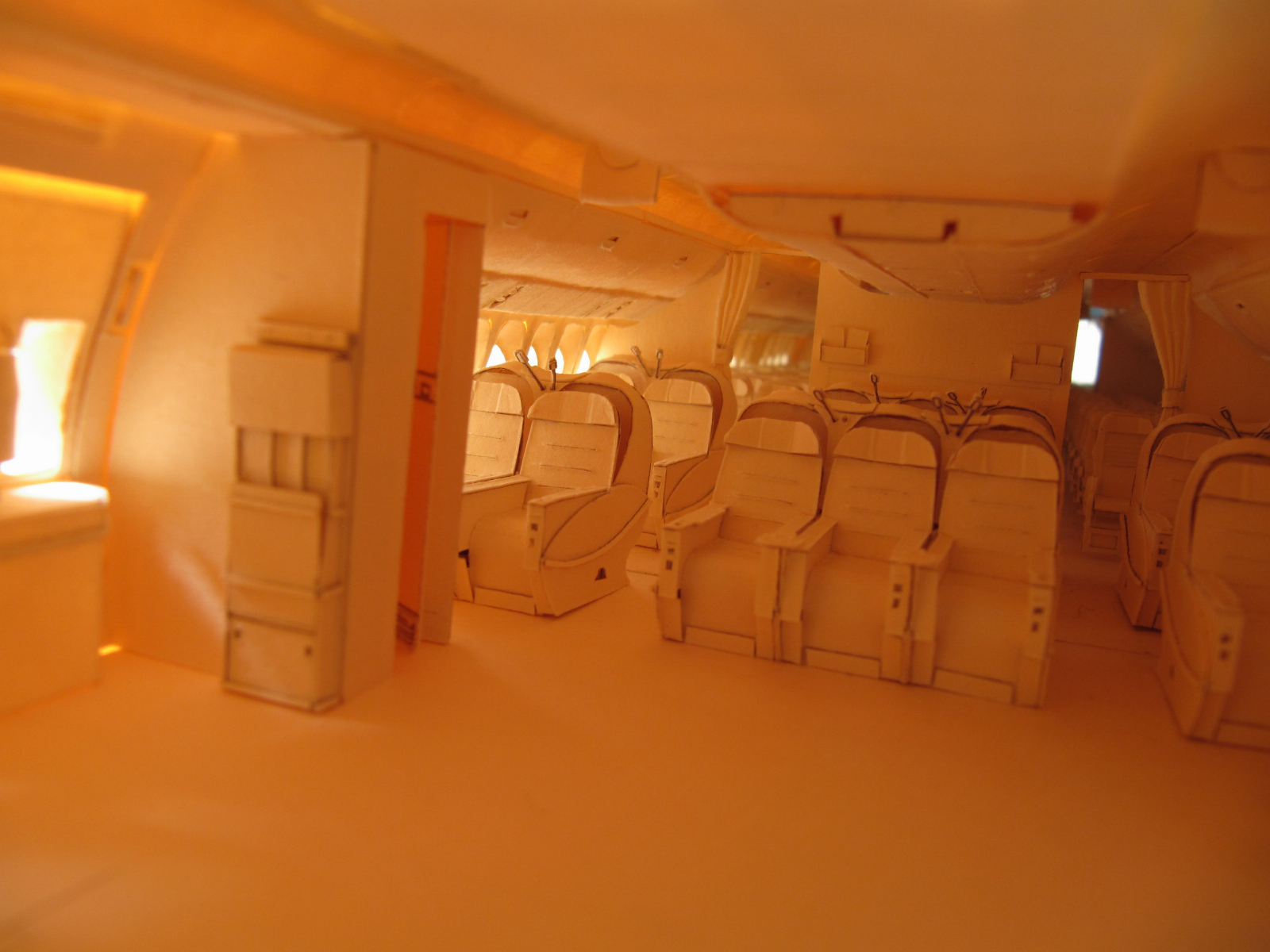 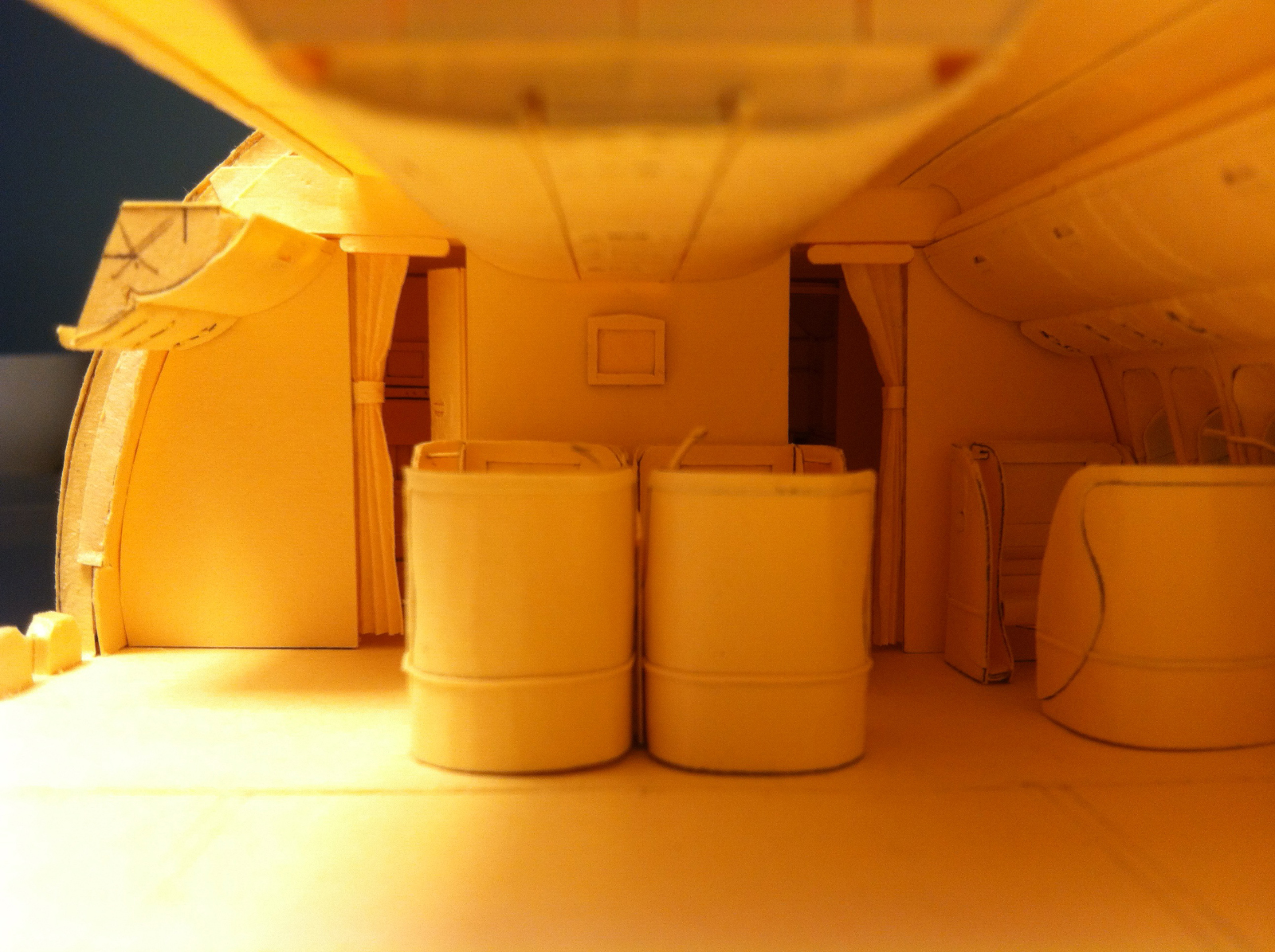 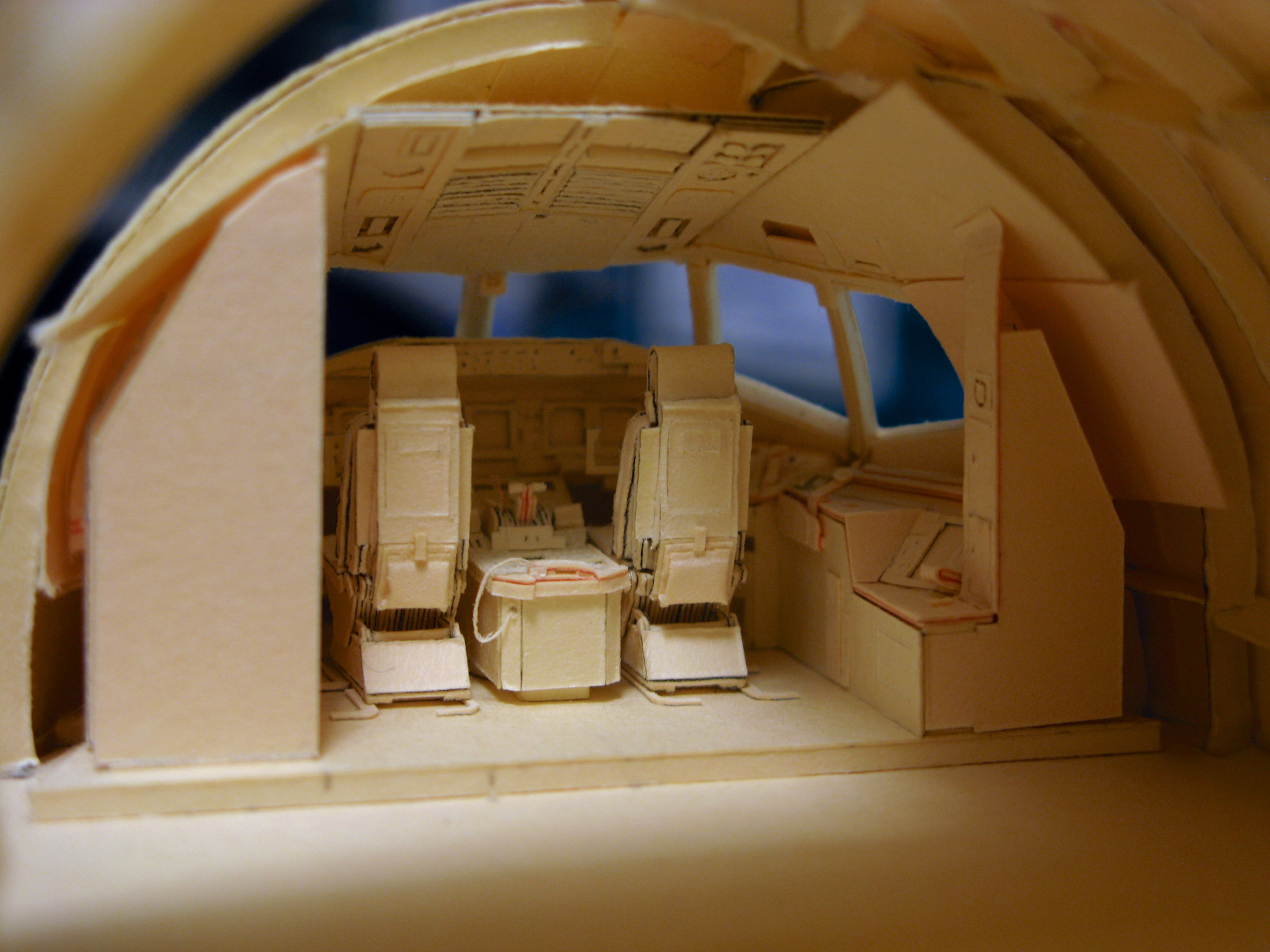 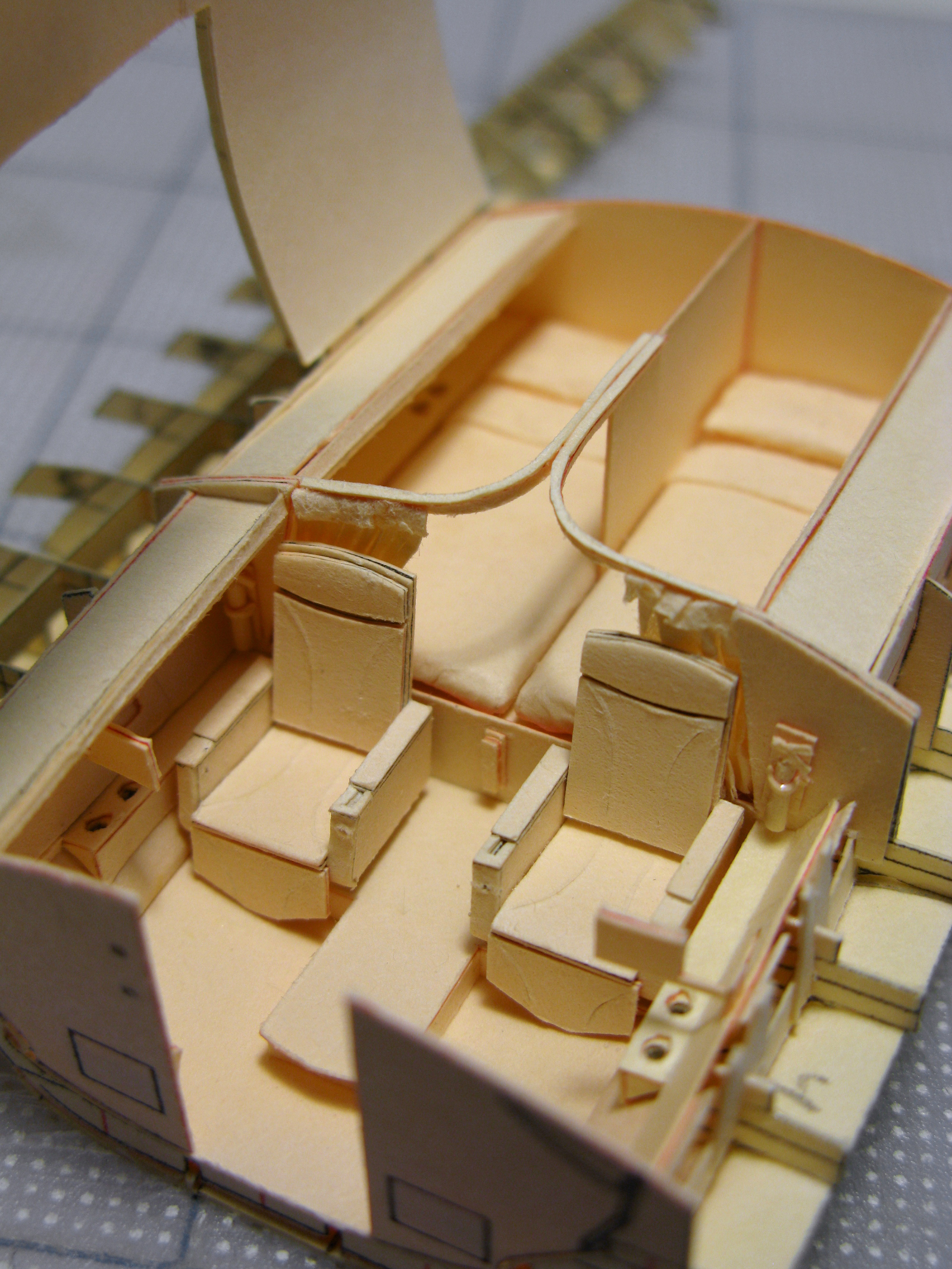 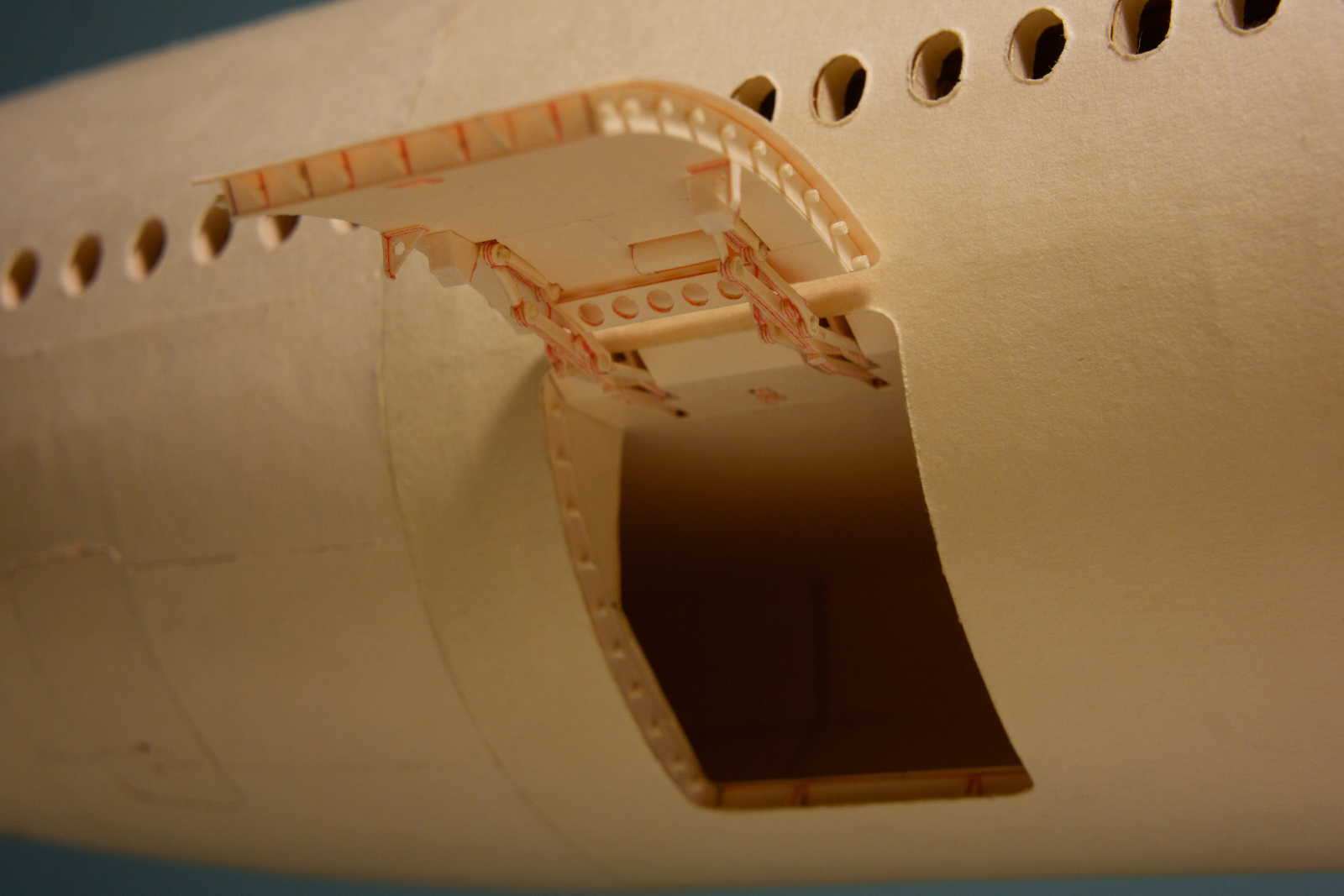 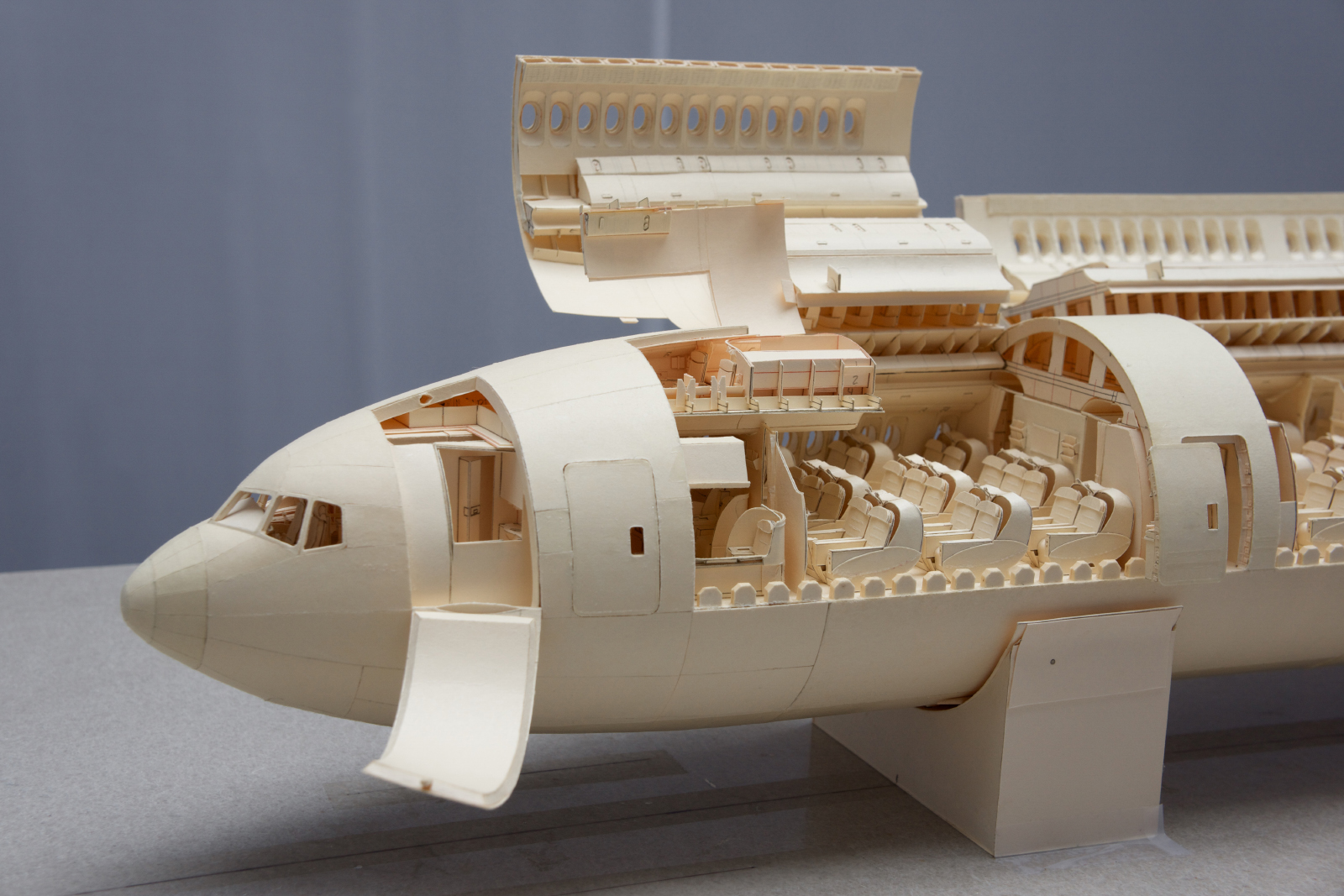 The moving parts contribute greatly to the realism. The doors, flaps, retracting landing gear… I have always wondered, are the hinges made of paper as well, and how do they stay in place?

Everything is paper, down to the hinge pins. They’re actually pretty simple in principle; I delaminate and roll paper into a very tight pin (an “axle” I suppose) and stick it through the parts, securing it with glue on either side. Much more durable than you might imagine! It’s amazing what paper can do.

Here are the elevator hinges in the horizontal stabilizer: 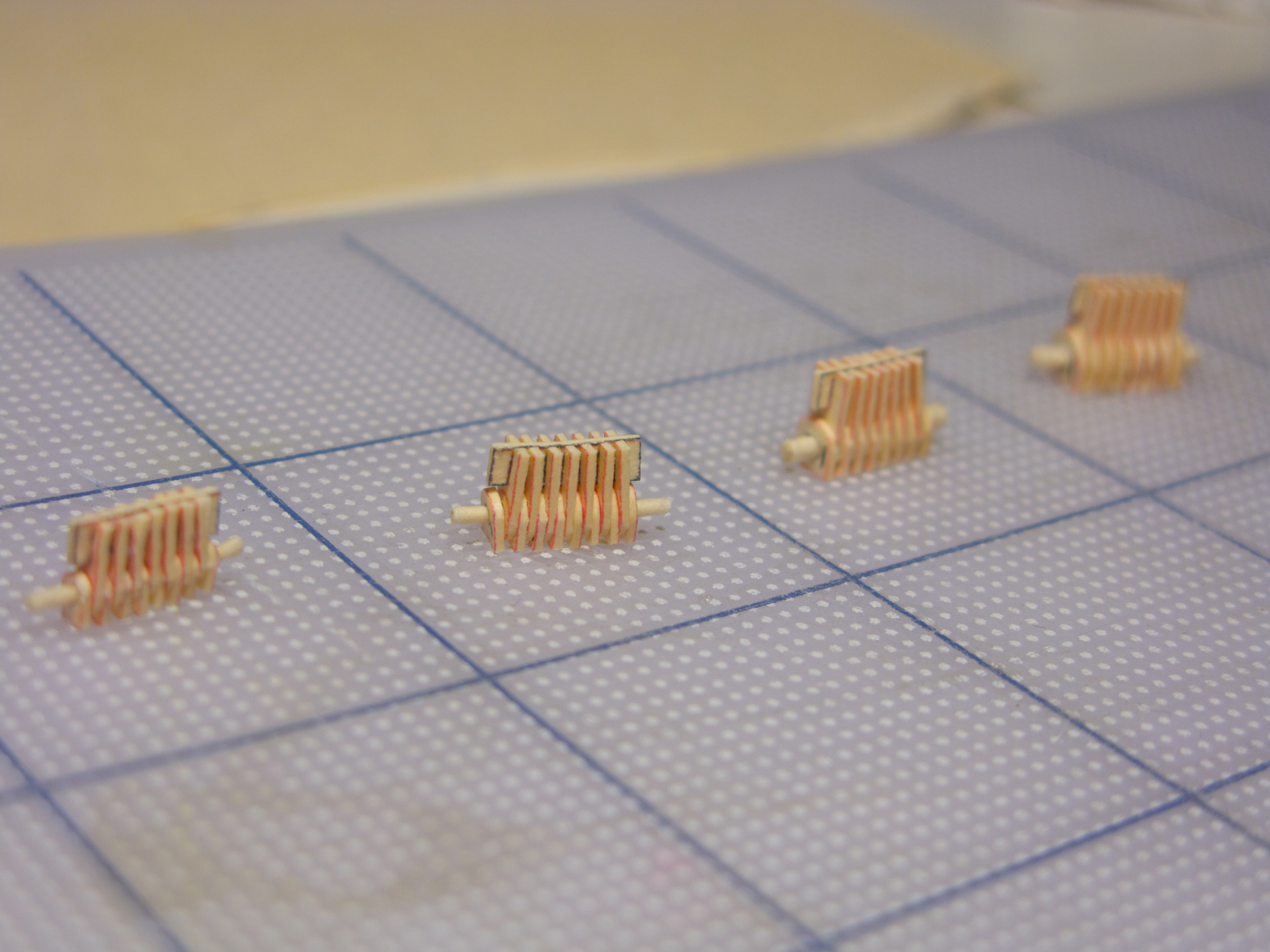 Depends. When I’m designing, it’s just my regular desk since everything is done on the computer, but once I get into building I clear it off and lay out a large cutting mat, along with the requisite xacto knife and straight-edges. After a long session of part cutting, the floor is usually a mess of scraps.

This is a bit stylized because it was part of a project for Singapore Airlines (see below), but gives you an idea what my desk looks like during construction: 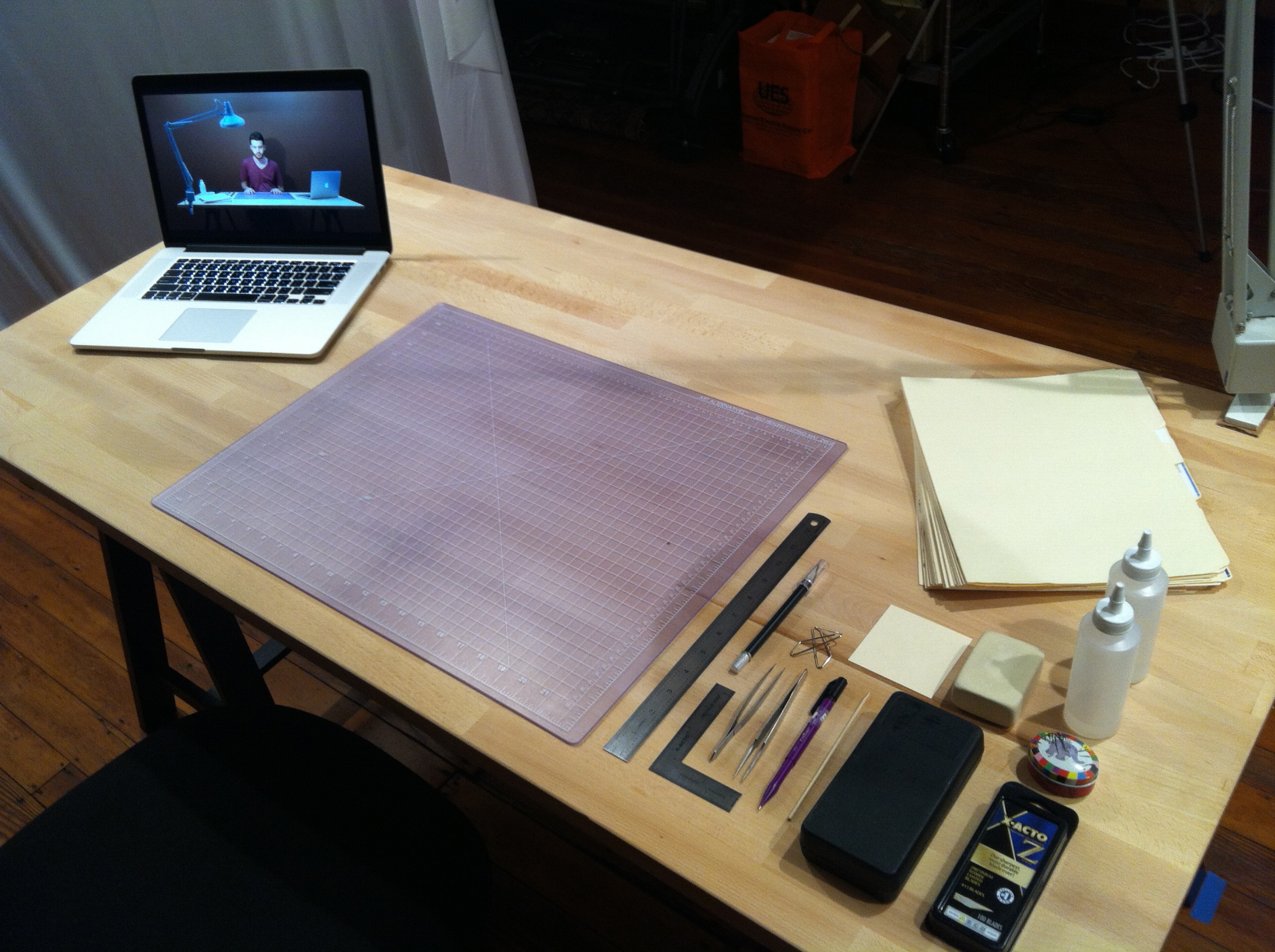 In your landing gear load test video, you mention that it is made to scale (2,145 kg equivalent to a Milion pounds at full scale). It’s impressive how can it withstand such a load. It’s just paper! Just… how?

Well, I was surprised too! In retrospect, I’m not actually sure it was a great idea to do, but the MLG survived, as you saw. Paper is much more durable than one might think, though, and what I’ve learned over the years is that there’s pretty much always a way to make it as strong as needed. If your designs are good, you’ll end up with a shockingly functional and durable piece, and I definitely lucked out in those regards with the landing gear. I suppose the designers at Boeing face similar challenges: how to make the fuselage as strong as possible while keeping the weight down and the metal as thin as possible. 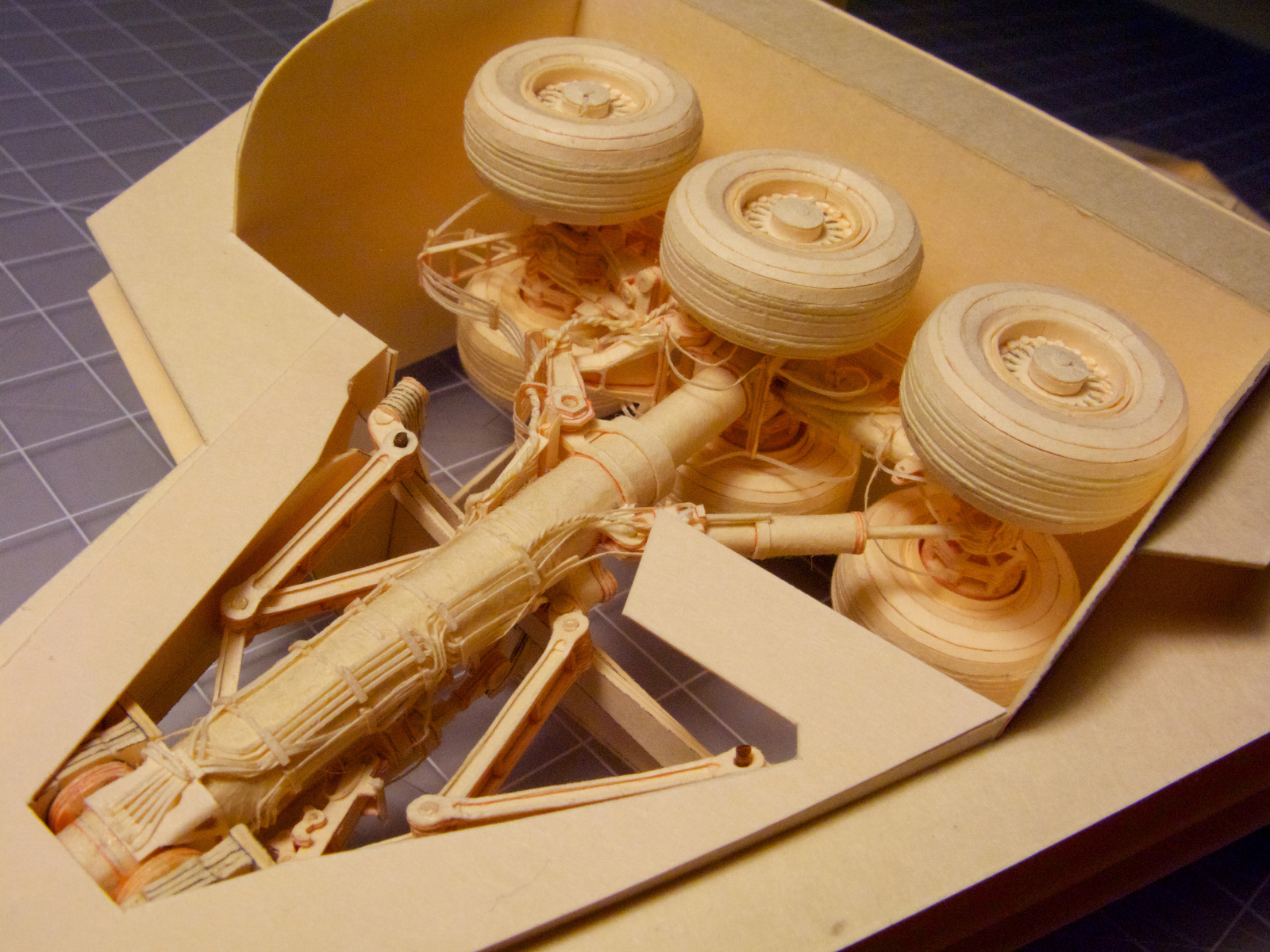 Looking back (and forward)

What was the biggest challenge? Most frustrating part to create?

I’m currently working on the wings (specifically the leading edge slats) right now and those have proven to be the most complex and frustrating part(s), partly because of the geometry and also because of the insane number of articulating pieces. And, of course, I’m being a bit of a perfectionist so the design process has really dragged out, but I’m excited to see them come together, because I think they’ll be quite beautiful when they’re complete.

Did you learn something that you didn’t expect while working on this project?

I started out with very little model-making skill and never would have expected to be making the kind of pieces that I am now, so that’s definitely been a nice surprise along the way. I guess “practice makes perfect” really does apply here.

Your Air India B777 model has had a fair amount of news coverage. Did that result in new creative opportunities?

It certainly was nice to get so much amazing recognition, and it did eventually lead to me working on a project for Singapore Airlines called No Detail Is Too Small, which you can check out here: No Detail Too Small Social Campaign

Are you working on something new right now, that we can look forward to?

I’m just working on getting the 777 finished! It’s hung over me for many years and I’m ready to see it complete. I’m deep into wing design right now, so stay tuned to my Flickr/Instagram and YouTube for updates. 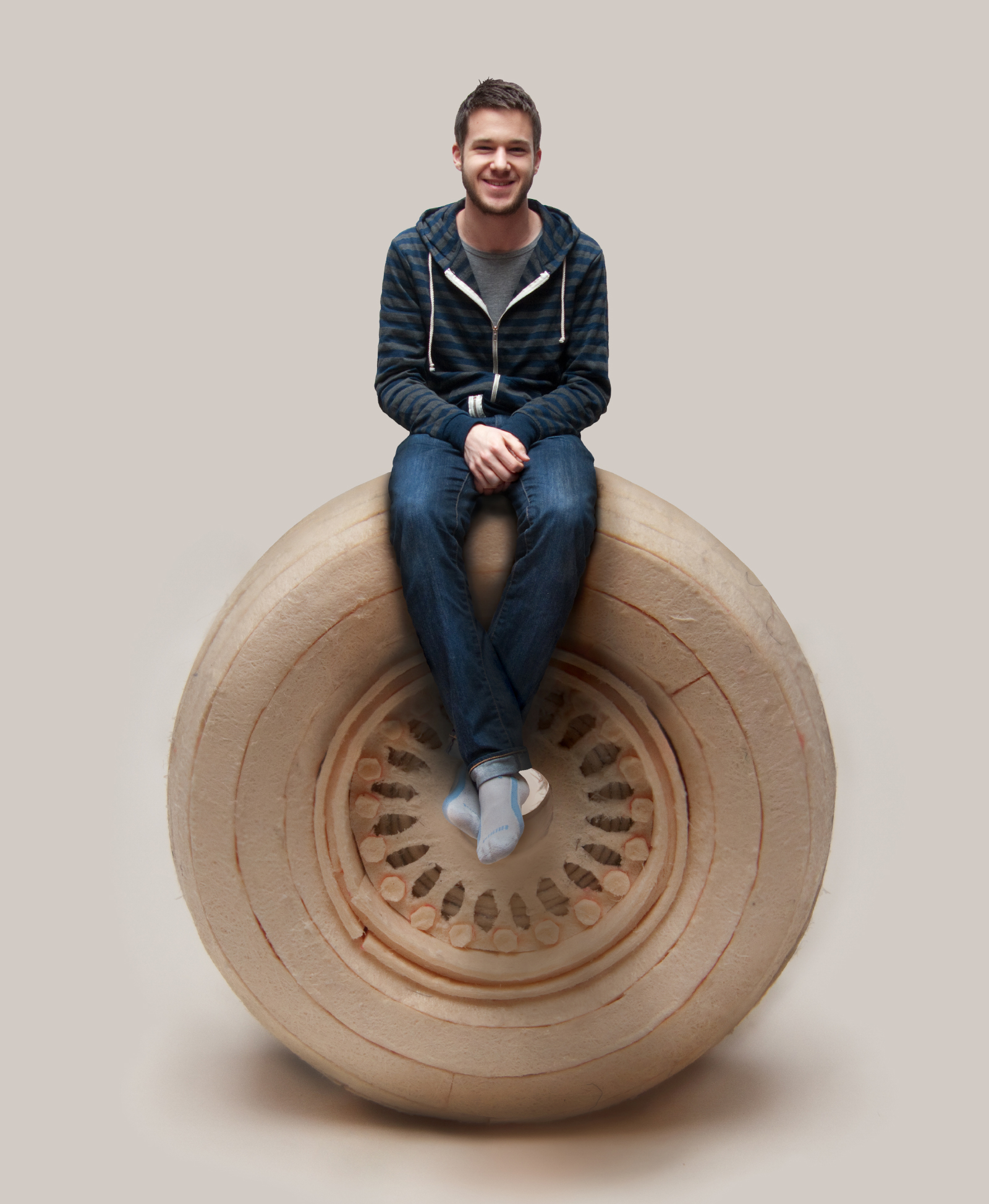 I want to give a big thanks Luca for sharing all these insights into his work!

You’ll find mesmerizing time-lapses of the construction and more on Luca’s Youtube channel. I also highly recommend Luca’s Instagram and Flickr where he has more images documenting the plane’s construction and also fine landscape, architecture and people photography.

All images in this article were mady by and belong to Luca Iaconi-Stewart. Any unauthorized use is not allowed.